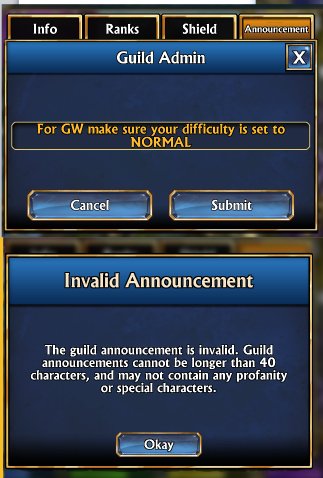 Are you saying that the presence of the filter itself is insane, or some particular censoring result was insane?

On PS4 you’re not allowed to say “submit” or “healthcare”. I guess “submit” has associations with S&M culture, or something? but it really makes no sense to me when I get censored for telling people to submit a support ticket. “Healthcare” cracks me up because, like marijuana, it contains “thc” (took me a while to figure that one out!). However, you can still say marijuana, weed and any number of other associated terms, as evidenced by global chat…

@Ariel Do you have any high rank officers that could try setting it from their mobile account? We haven’t changed our announcement, and it is still over 40 characters.

I’m afraid to touch ours as a test.

Also, if the limit IS in fact 40 chars, why does it let you continue typing? Its a real pain to count all my characters to see if its less than 40.

I think it used to be 100 characters the same a normal chat message, which still felt short.

I’m a mobile player so I haven’t had the new chat inflicted on me… YET.

But it boggles my mind that the Devs seem to have put yet more effort into making communications HARDER in this game!

Communications is already this game’s biggest problem. Recruitment is a misery!

• Recruiting in Open Chat is a tedious, thankless task that no one wants to do. Now, in addition, if you volunteer to recruit for your guild, you will probably get blocked by dozens of other players who use Global Chat for socializing!

• Open Recruit is broken in so many ways… you can’t personalize your message or list REQs, so players waltz into your guild and 1/2 of them for whatever reason never even check in with Guild Chat. So there is no way the GM can communicate with them to set them straight! No choice but to boot them when they don’t do GW or blow off other REQs. Then some of them immediately rejoin if your Open Recruit is still on!

• Therefore I’m here to try Forum recruiting, but not very hopeful as we got little response last time we tried… and we’re a top 50 ranked guild.

The game is frankly abusive towards GMs, who have to put in tons of work to keep a guild together and then have to deal with the devs not only NOT fixing the issues, but creating NEW ways to make communications more difficult!

A lot of this could be solved by allowing GMs to direct-message their members (via mail). But until that happens, Guild Chat is the only practical way to keep a guild focused. Please stop making it worse!

I believe the profanity filter is a holdover from the console code and is required by Microsoft/Sony.

As for the guild announcements, it might also be a holdover from console, but hopefully can get changed.

The profanity filters are built in on console and operate completely differently on Xbox and PS4, so I don’t think they are actually in the GOW code. Xbox censors the entire message while PS4 censors just the offending word, and the ‘offensive’ words are completely different. I can’t say “Healthcare” on PS4 and Xbox players can’t say “gold”.

It is possible that Sony and MS provide their censorship rules to developers who are obligated to include it in their games, but I don’t see why either would carry over to the PC version, even if that was the case.

Guild announcements are doubtless a carryover from console, though I’m not sure why those need to be limited to 40 characters on any platform.

It is possible that Sony and MS provide their censorship rules to developers who are obligated to include it in their games, but I don’t see why either would carry over to the PC version, even if that was the case.

Based on Nim’s comment here I feel like it’s a case of the devs are obligated to include it:

As to why it’s currently on PC, it’s likely mostly to do with the fact they used the console code as a base. Also to help keep one code base the filters have to stay in the code. What will hopefully happen however is that a check will be added to the code to use different filters for different platforms (since you mention that MS and Sony have different requirements this sort of code probably already exists) and PC/Mobile will get a different filter eventually.