Probably the most frustrating thing about high-level guild wars is the number of guilds that have their top players leave and return between GW events so that players who should be Paragon or Champion create a firewall in the Soldier slot instead.

Devs should consider some sort of mechanic to discourage this behavior - a penalty of some sort.

Really? How nuch worse a soldier ranked player can be in a top guild than their paragon?
I think on uhat level it neans very little difference.

so that players who should be Paragon or Champion create a firewall in the Soldier slot instead.

That’s probably a good thing. Since defenses aren’t distributed evenly, soldiers can get 0 defense battles in a day and only really average like 1-3 battles most times per day. If they have the ability to be Paragon or Champion, then its probably good they arent the one’s setting defenses at Paragon or Champion level… usually.

That might be work out for guilds with just 4-8 very good players. But if there are more then 15 very good players and they get distributed at soldier stage, you will always face a power house at the very beginning and probably further. It costs you way more points to loose vs a soldier then to a champion or paragon.
If you are not even able to reach the paragon, he could be the worst player of the guild.

So the OP concerns are justified imo.

Devs should consider some sort of mechanic to discourage this behavior - a penalty of some sort.

Hard to think of a solution, that does not harm other cases of guild change weeks after the fact. And creating special rules for players, who rejoin a guild, they were a member of previously, may be a bit much for such a specific issue.

How about the idea, that the player rank is determined by the last guild wars score, no matter in which guild it took place in, instead of the current guild-intern ranking?

Jerog : That’s viable. It doesn’t have to be punitive, it just has to prevent the behavior or the “reward” for the behavior.

The ‘revolving door’ tactic used by one guild in particular that I can think of is not particularly sporting. It’s great for them because they switch between the numerous guilds under their umbrella (family of guilds?) to take a break now and then in a lesser req guild only to be replaced by someone returning from such a break. They do this primarily to maintain high trophy output and to fend off a stand alone guild who would surpass them if they had the courage to play fair. In wars, the battles won as defence lower down the pecking order have the biggest overall impact score wise so I think the OP has a valid point. I think the idea of being placed in wars directly as a consequence of your previous score is plausible. Anything that promotes fair play should be investigated.

I don’t see them cheating if not botting.

Look these players transfer on Sunday and back to their respective guild after Monday reset. The rank is carried over too. So if the transferring player is paragon then next war that player is still paragon when he transferred back to a GW family guild. Not always a soldier.

Note: I am not sure what happens when the transfer is done on GW week day 0 [defense set day] and leave before reset.

Well, it’s been a while, but how does that ‘revolving door’ tactic work exactly?

Last wars - August 15-21 - I earned enough points to become Paragon for this week’s event. I left the guild middle through Tower of Doom to go to one of our beginner guilds and used my truckload of sigils helping them get rewards, then came back on August 26…so I should be Soldier now instead of Paragon, right?
The game doesn’t seem to agree with that and I am Paragon (as I should be according to last wars’ results). 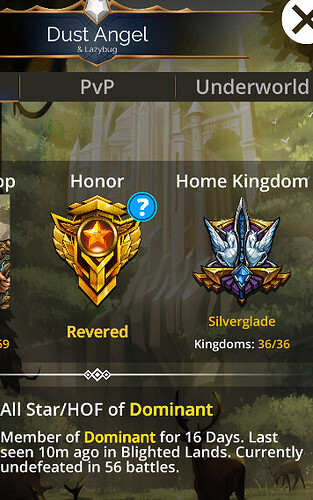 In competitive B1/2 guilds - most of them use very similar defences.

Players that like to compete score fairly similarly over a 12 month period. Not relevant however as OP is talking about defences faced…

There are no 4 firebombs or wrong defences.

A paragon from the previous wars might have won 2 or 3 wins with their defence.

Odds are in organised guilds most guildees use similar defences, or just copy those.

In a recent GW three guilds fielded the exact same defence through every player faced by the entire guild.