Hi,
Yesterday I noticed that I didn’t get the 2k points from the 24 different troops in defence.
I checked and found out that on the first and second the there were the correct name of the teams setup on monday, but the troops on the first two days were the same (basically the team on twesday had the very same troops of the team on Wednesday).

The first is the defence i set up on last monday, the second is the bug 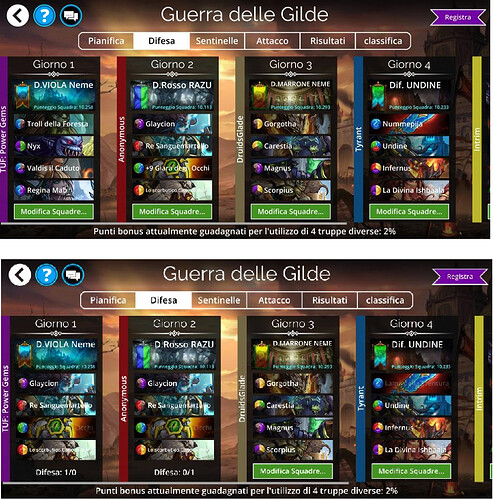 I hope u can help.

Hey thanks for letting us know about this.

When did you see this had happened? (day/time/timezone)
Had you changed the order of your teams in the troop menu at all? (not on the defense tab, just in the actual troop menu using the new sort feature)

Are you connected to the internet with wifi, mobile data or LAN cable?
Did you have the game running on 2 devices? ie. you were playing on one device actively but had the app running in the background on another device?
Did you receive any error messages or did the game do anything weird before you noticed this?

I noticed the problem wednesday morning at 9 am (Italy Time zone).
I didn’t change the order of the troops.
That time I was connected via mobile.
I play with 3 devices (phone , tablet and PC). Pheraps there was the app frozen in background in muratura tablet while I was doing the war on my phone.
I didn’t receive any strange error message or anything weird this week.
The only error i receive from time ti Time Is the one that notifies me that the data Is out of Sync and the game Need ti be restarted.