Guild progression is still too slow. The only solution would be to run guild wars more often, preferably the original weekly rate.

Especially if it didn’t replace the other events, which I know some people like more.

Guild Wars only requires 5 combats per day, leaving plenty of room. After at least 6 months my guild has yet to meet a guild that has a chance against us.

A return to weekly GW will never happen.

I wouldn’t be surprised if if only occurs every 5 weeks sometime later this year. Once devs slot in another weekly guild event which encourages gem spending for all players like Invasion/Raid/ToD currently do.

weekly GWs sounds amazing when you are not competing in the 5+ brackets where the magic happens. but once you are there… you wont want it weekly anymore

I’d still want it weekly because the rewards increase.

And if rewards were no longer worth it to the guild, there’s no reason to remain in a high bracket. If you want less aggravation more than you want more gems, skip a week (or three).

What’s crazy is that top.guids, where it is hardest, came to love daily guild wars. Those of us, personally, that couldn’t hang moved down the chain. We will adapt, we will continue, we will thrive. We are Intrim.

. GW x3, with better Bracket mobility and guild-wide participation rewards (Chaos orb) instead of the 100% bonus exp (keep the seals?), 1x ToD as per current schedule

. Or put something else in between the other GWs.

GW is so different to the other modes that it feels like a complete brain switch after 3 weeks’ break (which is annoying, for me

). While I’m sure Sirrian fought tooth and nail to keep GW from the pesky 505 repo men (

), it’s almost like they need to decide whether or not they’re going to keep it (

) rather than leave it so decimated quartered.

Start with 4 monocolored troops and finish with 4 troops, it was clear and no ambiguity.

All they needed to change was the 24 different troops for defense, but of course it was too simple, they decided to also mess with the formula and became a real nightmare.

This is not a bug report, so no. Once a month is enough.

Tbh i am starting to wonder how many of those “rules” are true and how many just urban legends and such.

Always heard true damage is bad, istant kill is bad,transform is bad, anything but plain damage and skull bashing is bad basically.

Today, purple day on ps4, couldnt find a skullspawn team that was looping as i like so gone full true damage way, lost aswell, 2 troops on first fight and 1 in another, on top of getting kinda damaged pretty much every fight and still: 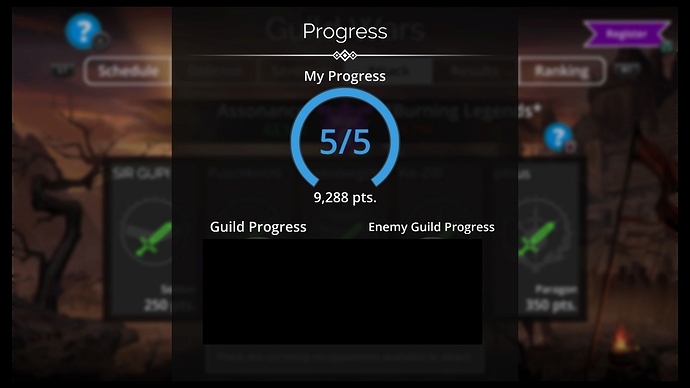 Got the feeling that skullspawning get more points almost only cuz looping like mad ai dont get to play and you dont get damage, or almost, sadly something you cant do with true damage but dont think true damage itself is such a problem for score (best score this week was 9561 but on green day where once you get started you never end and in some matches didnt even got touched).

Oh and on topic, no way that crap weekly, actually should just be removed from the game imho, kk thx bye, if you wanna CatFight join a high lvl guild already and stop making new guilds every 10 seconds (that would also solve the prob of the QQ about having dead guilds as opponents in GW)

Always heard true damage is bad, istant kill is bad,transform is bad, anything but plain damage and skull bashing is bad basically.

I’m just adopting “Guild Wars is bad” and rolling with it.

Seriously. In every other mode, either the opponents are so strong I expect bad luck to be a part of it, or I can build an equally cheatyface team that mostly defuses things to where “cheesy” teams only beat me some small lucky % of the time. That’s what makes me feel good: keeping about a 90% win rate as I blow through grindy matches where the win rate doesn’t actually matter too much. I have time to waste, it wastes my time, everybody’s happy.

GW instead puts you against the worst of the worst when it comes to cheap teams but disables your ability to create teams to get around them. Your 5 matches per day are part of a long, slow grind to try and get your guild out of the “no rewards” zone into the “decent rewards” zone. Every loss you incur might cost your guild weeks worth of climbing this ladder.

So you spend more time preparing, and you try to spend more time on each match as if “strategy” makes any difference. That makes every single lucky turn on the opponent’s side stick out more than usual. And when you see things like a Rope Dart team go off on turn 2, take 12 extra turns, and kill 3 of your troops, you get more angry than usual. Or if you see something like a Life and Death team hit the hero’s instakill trait twice on one go then Death Mark takes another one of your troops, you get pretty mad.

All in all I think we’re finally at the point where the game would be better without GW. It’s a weekly lottery that determines which guilds get huge rewards that’s only vaguely connected to skill.

Yes, only require 5 combats x day that on the lower brackets you lot hate so much take no time or effort, on B1 (but, why not, even B2) each match take a lot just to decide what to use vs this or that and then you may still lose cuz AI do a 3 match that start a “cheating on player favor” event lmao (1 of my 2 losses this week was right like this, other 1 was cuz a doom weapon managed to cast and just for coincidence enemy entangled Glaycion recovered that exact turn ;p)

Heavily militarized guilds also organize it even more than ToD with ppls waiting until a good way to get rid of pesky defenses is found.

What’s funny is the same ppls than now are asking to get putted in higher and competitive brackets when they reach it are the ones more likely to quit the game.

I agree on the opposite of your whole thread tbh, i really hope we dont stay in B1 (even tho look bad right now on that side) and i would like that those guilds that get “demoted” go down by more than just 1 bracket, gimi some relazing roflstomp GW too thx :3

Or you could join a competitive guild

Hey, I’ve moved this thread to the Feedback and feature requests section so you can keep discussing