Guild Seals and Orb of clans

What you were expecting to happen, and what actually happened?
I used a major orb of clans from previous week’s rewards, but before collecting my full allotment of 1500 seals for the week. It caused me to hit 1999/1999 instead of 1999/3000 as I was expecting.

What are the steps to make it happen again?
Use orb of clans before collecting all 1500 seals. 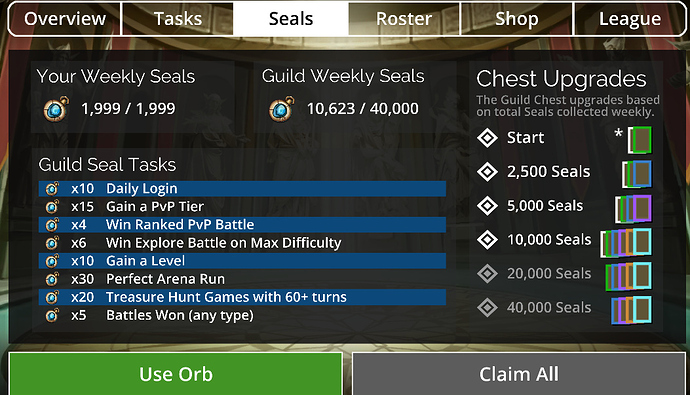 I think this is intentional. Orbs of clans do not increase your seals cap, they just grant you the seals. If you haven’t reached the seal cap yet, then those seals count toward the cap. It’s always been this way, since the orbs were released. You just have to know to collect your 1500 seals first before using an orb.

I expect some players like it this way too, they can use an orb to get to the seals requirement of their guild quicker by using an orb.

I don’t know why the devs did it that way, it’s certainly confusing that it works that way when the money purchased guild elite also raises maximum seals.
Devs don’t do refunds for this stuff unfortunately

Devs don’t do refunds for this stuff unfortunately

They used to reimburse the potential seals as a one time deal.

unfortunate. oh well - lesson learned at my expense for all out there.