The current format for guild tasks is lopsided. I think a lottery/slot machine type task that gives random rewards for gold would be neat. Would it be hard to introduce something like this as a button for task completion to award all guild memebers with the random reward? It could also add to the completion of the certain task type

Don’t forget that one day you yourself will also grow old. It will be interesting to see if your gerontophobia persists then.

You clearly are missing the point here.

They have that already. They’re called legendary tasks.

Well, I am never against new feature. As long as it does not replace the old task. I have enough random generated stuff in GoW already !

What is that? I’ve never sen them do they unlock or something from guild progress? can you post a screenshot?

Can’t at the moment.

But when all levels of the basic tasks are done, then you get legendary tasks where for each million gold donated, you get 3 random bundles consisting of things like various traitstones, keys, gems, troops, etc.

You also get troop star bonuses too when the basic tasks are done. Both stay for the rest of the week. 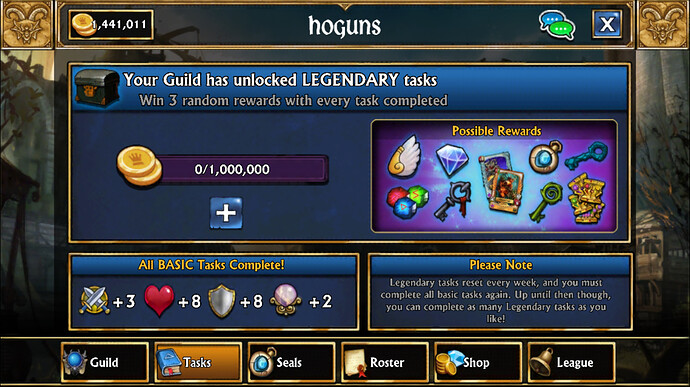 Oh thanks guys i had no idea. Guess my guild hasn’t been able to achieve that. I just thought it would be nice if it were an option not knowing it was already

No worries, Thunderpants. I believe its only around 30 guilds that makes it to Legendary tasks.

Im sorry but your name @Thunderpants makes me wanna sing

Such a great nick, first time ever ive seen it. It was never in my imaginations…