For newer members to GoW, you might be surprised to hear that years ago when the New Mythics came out, there was a substantial amount of lore released with the troop on the forum.

I have always enjoyed reading the lore but it is quite annoying trying to navigate through the news articles here to find these long forgotten posts. I decided to add a channel to my community discord server called #forgotten-lore. There you can read the official lore that was released with new mythic troops back when the game was new. You can also subscribe to the channel to get these delivered to your discord server to share with your guildmates.

The channel is updated every Sunday with a new post and also the original old style artwork. Come along and catch up with all the Krystara news! 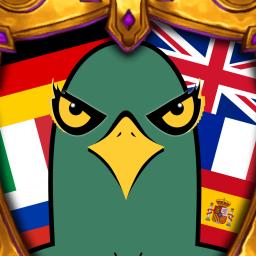 Check out the Hawx's Flight School community on Discord - hang out with 713 other members and enjoy free voice and text chat.

Here’s an example of one of the posts:

Some Gods have existed since before time began.
Some are the children of those Gods.
Others ascended to Godhood, after noble and heroic, or foul and diabolical, deeds.
While some have unwittingly had Godhood thrust upon them.
And then there’s Stonehammer – he just refused to die.
At the battle of Khazdorin Peak, when his whole clan was slain, he refused to give up until every last Orc lay dead.
In the great Forge-Explosion of Dwarrow Deep, he refused to let the fire burn him or the rock crush him, as he clawed his way from the rubble.
When his time as King of Karak Khaziel was over, he refused to lay down on his bier to go and meet his ancestors.
And, finally, when Death came seeking him, he kicked Death fair and square in the nuglets, and went on his way.
After that, his exploits became the thing of legend; not the type of stuff that earns you a shot at divinity, mind you, just a lot of… attention
For example…
They say he once made fire in far north by rubbing 2 icicles together.
That he once threw a bomb that killed 50 Orcs… and then it exploded.
That a Sand Cobra once bit him on the leg, and after 5 days of excruciating pain, the Cobra died.
That he invented the giraffe by delivering an uppercut to a wild horse.
That he once punched the Cyclops between the eye.
And that he once cooked one minute noodles in 15 seconds.
It’s entirely possible, at that point, the Gods looked down and decided he was making them look bad, so the next thing you know… BOOM! He’s the God of the Dwarves! 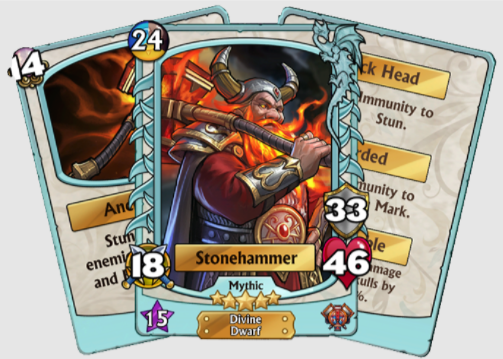 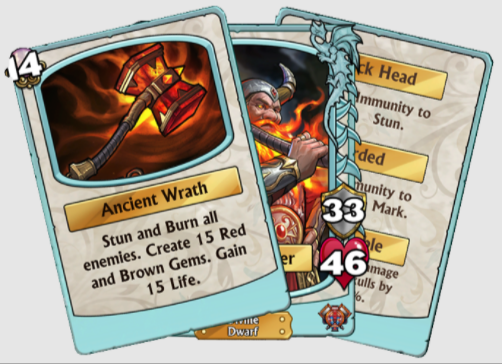 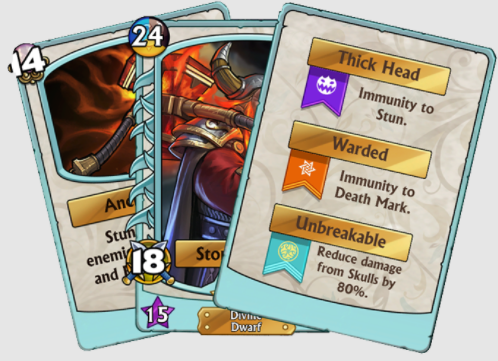 Nowadays when New Mythics are released, the devs just describe its spell, no more, no less.