When you cast Storm Knight’s spell, targeting a blue enemy, if you kill the enemy with the spell, the second effect that destroys a column and gives him 5 attack doesn’t happen.

Lower an enemy troop’s health to the point where Storm Knight’s spell can kill it, cast the spell targeting that enemy, and the bug will present itself.

agreed. also happening to me

We have fixed Warhawk’s spell so that it will earn the extra turn even if the Enemy dies.

Firsty, I can confirm also having this problem - no column explode and stat gain if targeted blue enemy dies.
Secondly - what @Jonathan says.

If they have fixed Warhawk’s spell, why does Storm Knight suffer from exactly the same issue?
The only thing I can think of is that Storm Knight spell was coded before Warhawk fix and nobody bothered or it didn’t even occurred to anybody to go over and update Storm Knight’s code in order to avoid this very same problem.

I had this problem on XBox too.

I’ve also noticed that if Storm Knight attacks a blue troop, and that troop dies, you do NOT get the additional 5 attack.

Look forward to seeing it in a troop rebalance in 2022

EDIT: I was mistaken, the column is exploding as it should be, when you don’t kill the mob.

The other problem with the storm knight’s spell is that the “column destroyed” part never triggers. If you don’t kill a blue enemy, you will get the +5 attack, but a column never gets destroyed.

Are you completely sure?
There is an issue when blue enemy dies, but surviving enemy seems to be working fine. 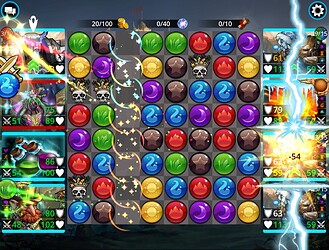 You’re right, my mistake. Not sure why I wasn’t seeing the column explode before, but I see it now. Thank you!

We have pushed a fix for this issue.