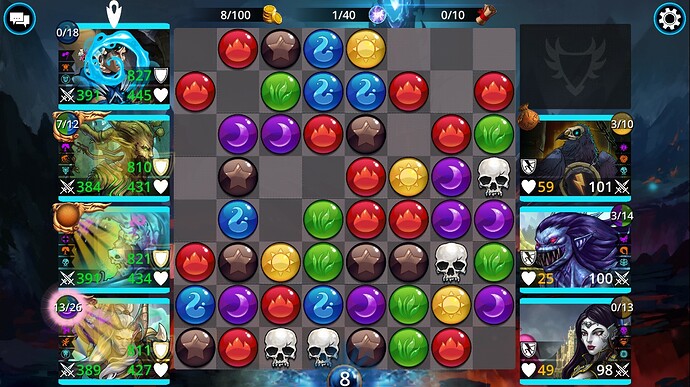 What you were expecting to happen, and what actually happened:
Spell cast to work then I can carry on playing. Spell cast locked the game instead.

How often does this happen? When did it begin happening?
Tried this on ToD and did not use weapon again.

Platform, device version and operating system: iOS latest software iPhone 8 Screenshot or image: [image] What you were expecting to happen, and what actually happened: Spell cast to work then I can carry on playing. Spell cast locked the game instead. How often does this happen? When did it begin happening? Tried this on ToD and did not use weapon again. Steps to make it happen again Cast new doomed weapon.

On the xbox the game doesn’t crash but instead of green gems, empty squares are been generated. The square can be moved an matched with green gems but don’t convert when a troop like Scurvy Seadog casts.

You know, it’s bugs like this that truly dishearten me. Seriously? Did no know bother to test this?

Tons of posts popping up and confirming that it just happened to me as well on Android.

I assume this means that any green to something converter will also experience the gem turning into another color but remaining blank.

To add an extra bug on top, apparently the game is locking up because there are no more moves possible. Didn’t the 5.6 patch notes claim to have addressed exactly this situation? Has the handling somehow gotten lost again with the 5.7 update?

With the introduction of Heroic Gems, we wanted to prevent the rare case where the board gets locked up without any available moves. We have added a board reset to the puzzle game. If there are no available moves on the board, the board will be completely cleared and refilled with new Gems. All troops will also be completely Mana Drained (even if they are normally immune to mana drain), to prevent any spell combination that could cause the board to lock up in an endless loop.

And here it is, the weekly bug! Why am I not surprised?!

Curiously, the weapon actually works fine on beta, so it looks like something simply got missed while being ported to the live server…

I shared this in one of the other threads that has popped up about this issue, I’m currently working on reproducing. So far I have had the blank squares appear, but they are quickly resolved in the next round and disappear.

But will share this with the team & keep testing!

Also will note, this is occurring when you used a Doomed Wand and not limited to using it within the Tower of Doom. I tested in an Explore run with my TOD team to check.

Update; this fix for this has just gone out.

Will keep an eye out for any continued reports on this!