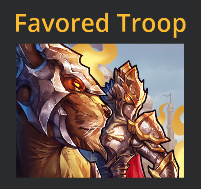 So. How this feature exacty works? Game have set Lion Prince as my favored troop, but why? I am not using him since few, like 6-7, months. So why is it shown here? :^ I want something different! xD It bothers me a lot, lol.

I’m not sure that anyone’s ever figured it out more specifically than “the game noticed you using this a lot at some point”.

My guess is internally they count the number of times you’ve played a match with each troop, or possibly how many times you use its ability. If that’s the case, the “favored troop” is probably the first result if you sort by that number.

So the only way to change it is to relentlessly play some other troop for as many matches/casts as you played that one. But you’ve got no visible feedback for how long that is.

Mine’s Venberak, which is… strange. It’s on my TDS team, but I feel like I cast TDS or Worldbreaker 2-3 times per Venberak activation. So it’s probably just “whatever sorts first when sorting by matches played”.

If you register on GOWDB.com, and then access the leaderboards, you can see what your top troop is and how many times you’ve used it in PVP. As far as I know, there isn’t a way to see how many uses you have on any of your other troops, but you’ll at least know the upper limit of how many uses you’ll need to supplant your current #1. 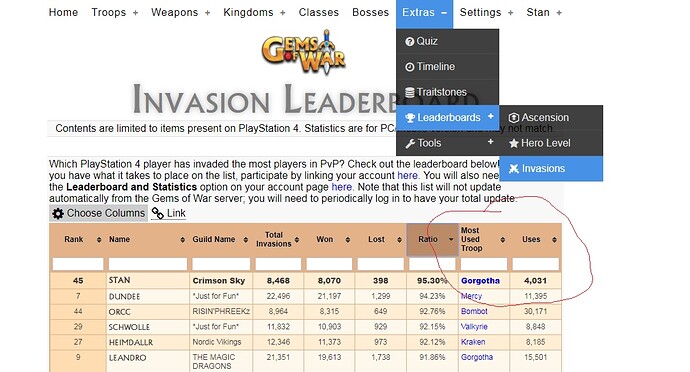 I’m not 100% certain that this corresponds to the “favored troop” in your profile, but it does for me, and gowdb only pulls the information that the game tracks, so it stands to reason that this is it.

Mine is the same as on gowdb. I was a little stumped on how exactly it was determined, in game, for some time as well. Krystenax is listed as mine now, which makes sense cuz i had two of him on my pvp team for awhile and i still use two for gw sometimes. I had trouble figuring out most invaded for awhile too, cuz i rarely went in broken spire. Once i started doing massive amounts of pvp it changed to whitehelm, and i know from reading on here a lot of people use it as their home kingdom, so logic dictates it’s also based on pvp. They may not affect gameplay directly, but it still would be nice if (maybe in the tutorial?) there was a pop up explaining how they are decided.

I am still not sure about how exactly it counts the uses of a troop. I am playing GoW about a year, and I am sure that I stopped using Lion Prince afte idk, maybe 2 months of playing. I found many better troops later, and I used them in a fight way more often than Prince. But thanks for this information about Leaderboards on gowdb. I had account there but didn’t know about this feature. And it shows my stats like this:

And just like you, I wish there was an otion to check other troops, how often they were used. I will do a test from now, I will use other troop and I will count how many times I used it in PVP xD

For me, Gorgotha on around 40% of my invades makes sense. I’m not sure if it counts both ranked and casual, but it definitely counts multiple copies of a troop since some people have more Bombot uses than total invasions.

If you want to get a new ‘favored troop’, I’d say make a 4x Bombot team and go to town. It should only take you 150 battles to pass Lion Prince.

I made a small test, I used Lion Prince in some random team on PVP and it really counted this match, now I have 621 uses. Well so… the script works fine. It looks like there is nothing much to do about this like only fight fight fight with something else to beat this number.

And I wonder if Arena counts for PVP too :v

Go to town? What do you mean byt that?

go to town
phrase of town
1.
informal
do something thoroughly, enthusiastically, or extravagantly.
“I thought I’d go to town on the redecoration”

Basically, I mean you’ll need to 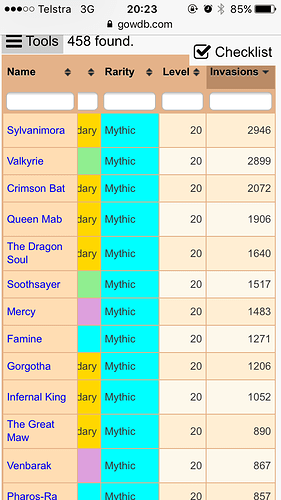 Go to gowdb.com enable ‘invasions’ under the tools menu and sort via invasions.

The numbers are listed the times used in PvP ranked and casual. Teams with multiple copies of the same troop register multiple times. So one match with Soothsayer/Valk/Mab x 2 increases Mabs number by 2.

There’s something wonky with that list, though - mine says I use Sheggra 386 times and I haven’t even used her once. She isn’t even fully traited and I leveled her only a few weeks ago.

The rest of the list seems okay, though… but dang, I will need a LONG time until my guys will catch up with my midgame dragons. 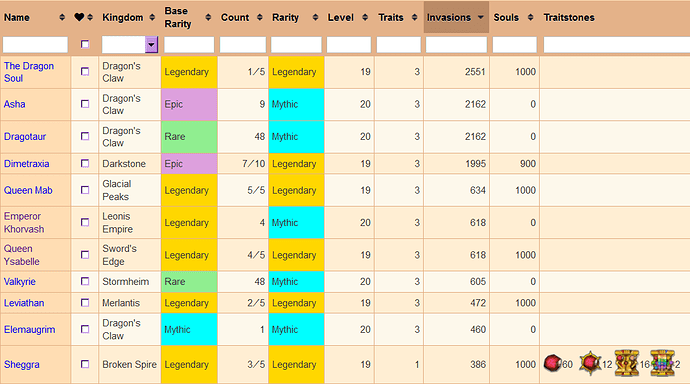 Go to gowdb.com enable ‘invasions’ under the tools menu and sort via invasions.

Is there anything that site can’t do?

i dont think it has real time leaderboard like tarans site yet does it? hope can do the same for raid leaderboard whenever it comes

@Sheba I’ll be waiting for you to catch up.

@Sheba I’ll be waiting for you to catch up.

Given how I only do PVP until reaching tier 1 each week, that will take a loooong time!

Interesting question: If you have two troops with the same number of invasions which would get both to the “favoured troop” position, which one gets the spot? Is it alphabetically? Or via kingdom ID? Or will I maybe see a different one every time I start up the game?