This weekend the Hall of Guardians is getting an expansion. The faction’s Deep Delve will become available for players to enjoy (once they complete Delve Level 100 or higher). It will also be gaining a new Epic Troop – the Guardian Pillar. This troop will be available in the event shop this weekend, and will…

With the Yellow/Red combination, if used with Gargoyle, it either gets mana blocked near the back (in which case, why use it?) or mana blocks Gargoyle (Ethereal Sentry/Guardian Pillar), neither of which are ideal results. It can also be ran to mana block Ethereal Sentry instead, but that’s just not a good idea.

If you’re running the team without Gargoyle like I think it wants, Guardian Pillar’s ability isn’t the greatest at mana generation. But more importantly, it doesn’t really fix any armor loss if any skull cascades happen. Magic Christmas Land where you don’t run into skull cascades, it only barriers your first troop, which leaves your back team vulnerable to be sniped out by the enemy Gargoyle in the last room.

I mean, I did beat a deep delve pure faction 500/ hoard 199 on my first try and the Barrier the first Ally worked as advertised, but the battles were not as clean as I’d like. Guardian Pillar died in the middle room to Orcs, go figure.

Potions (mainly barrier all at the start of battle) overperforms in this faction though, so I think it covered up the fact the team didn’t feel like it worked.

Edit: Guardian Pillar/Gargoyle works in an almost never cast Guardian Pillar unless the barrier is off the first troop kind of way. It did make me wonder why I even ran the troop.

I’m still of the opinion 1 of each of the original 4 is still the most convenient team (Arcane Golem is underrated in stunning for more damage/skull alignments), but its still a flawed team on skull cascades…

Guardian Pillar could really use a Brown/Purple combination or a choice of which ally you barrier, or both…

Or more likely, people aren’t going to use it in the pure faction regardless of anything.

Has anybody pulled a Guardian Pillar yet? It’s been four weeks, it should be in the loot pool as of today. 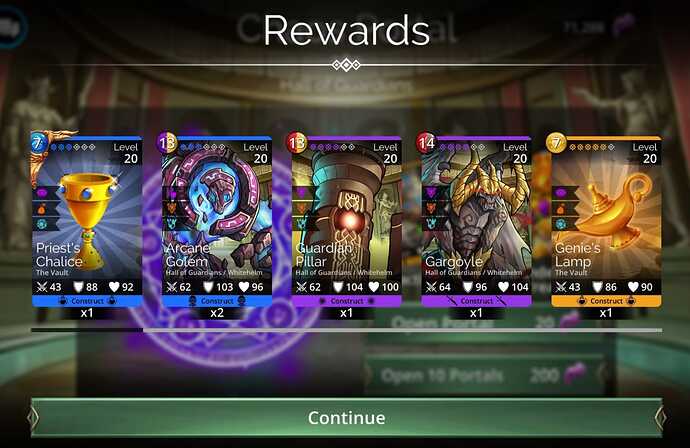 Thanks. Unhappiness prevention rule #1 in Gems of War, first confirm, then spend.