Having Impervious (immune to all status effects, devour, and mana burn), and Darkness (Decrease all enemies’ Attack by 4 on 4 or 5 Gem matches) is an overpowered combination that can result in scenarios in which you can have a full team that is unable to inflict damage of any kind, even if he’s hanging on by a thread.

My advice would be to pick one thing in the Impervious trait (immune to all status effects) and reserve devour and mana burn for something else. 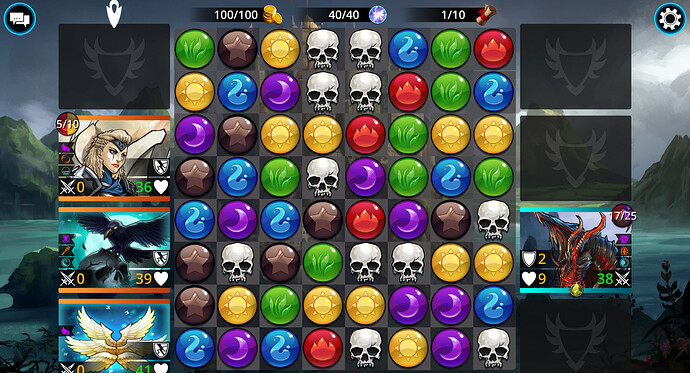 You can kill it with 4-5skull matches, should be easy with both Valkyrie and Mercy

4-5 skull matches - I didn’t realize that I could still cause damage that way. Thanks for sharing!

I think the main point is still a valid concern.

It’s only a real problem if mana burn is your main attack. Any other spell damage troop will hit him normally.

I agree. In most cases, a troop is considered op or broken because they have few counters and the few that do can be stopped easily as well. In this case, with the front troop being unknown, you brought a valk, mab, mercy team against the worse possible troop where at least 2 troops should be able to deal with it. Mab is strong, but weak to impervious. Valk and mercy mainly transform gems and do no damage. When facing against this troop for this team, he should either be targeted first or a different team used. Ele is far from the most op mythic atm. He pairs well with infernus, and is strong, but he doesn’t have huge for a trait and his mana cost is massive. He is powerful, but beatable without being greifish.

I’ve done the same with Gloom Leaf, I always focus on killing the Kraken (I’m assuming your other unit was a Kraken) in that team as then I know I wlll at least have GL to survive the rest.

That being said, I agree that on a 4/5 match, 4 attack is a LOT to lose but he is by no means unbeatable, or OP, you just picked the wrong team to fight with.

Any other spell damage troop will hit him normally.

So bring something that has a conventional nuke if you see Elemaugrim, easy. That’s nearly every troop, after all. I mean, okay, you probably had Khorvash in front, fair …

I think the trait combination itself is okay, but the actual strength of the Darkness trait is too much. That’s 20 skill points you lose, and it’s ridiculously easy to set up long chains of 4- and 5-gem matches. I think a very fair nerf to Darkness would be: “Decrease all enemies’ Attack by 2 on 5-gem matches.” Yes, ONLY 5-gem matches.

Well he will be really useful soon, just wait for new kingdom and you will be happy he drop everyone attack with all these doomskulls on the board