Hi. This is probably a noob thread but does anyone know why XP differs in 12EXP for no clear reason? I don’t have ring of wonder or blue armour and my standard L12EXP reward is 77. Sometimes, if AI summon it goes up to 97. Other times I get a very rare 116XP and i just don’t know what’s afoot. Any insight would be appreciated.
PS
Ive only recently noticed due to desensitised grind mode.

You receive XP due killing enemy troops. If you kill 5 you’ll get more.
The amount depends on your XP-bonus and may not evenly increasing by number of killed troops due to commercial roundings

As @CaptainAwesome said, killing more than 4 enemies will increase your XP gains. So with 77 XP for 4 kills, 97 XP for 5 kills and 116 XP for 6 kills sound about right.

Do you remember which kingdom and better which troops were involved?

No, but I am going to record the match next time it happens. 116XP is quite rare for me.

I’m currently not sure, what happens if a troop transforms i.e. Werewolf and if it will give additional xp, but I hardly doubt that.

Did you used a class which grants extra xp from battles maybe?

No, I am still boosting geomancer. You are right about summoned troops; 1 summon gives extra 20XP (77>97XP) so a second summon would possibly give the extra 19XP (i don’t know why it wouldn’t be 20XP other than rounding down) but it was definitely 116XP for 4 kills only. When it happens again I will give details. Thanks.

Afair the base xp per troop is 9
From there on you have to multiply it with your bonus from armor, vip, pet and guild statues 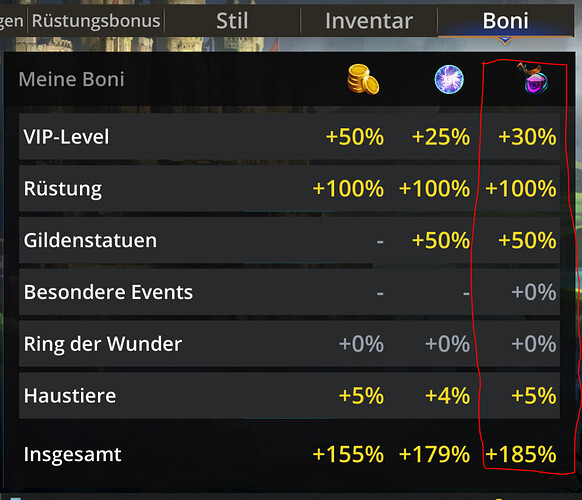 You had a Battlecrasher appear in the fight. It kills the troop it replaces, so you get more XP.

Aha. That could be it. I will check when I next get one. Good detective work. Thanks.