The points needed for each stage reward is killing me by means of ocd. Seriously wtf?

Also, it seems like light blue > orange > purple, from what I can tell.

it’s just me or it doesn’t run in x4. Something seems so laggy or weird. Don’t know

Scoring doesn’t make sense. At all. My results so far:

Yup. It’s impossible to know which is the most economical choice for your sigils.

Scoring: New events will have new ways of scoring. They may score off of items dropped by your enemies, specific troops or troop types killed, colored gems matched, or even 4-or-5’s of-a-kind that you match; every event will be different. And will clearly explain the scoring method.

And will clearly explain the scoring method.

But hey it’s not like we asked for more details the second the event post went up or anything.

Useless sentence to get around the copy and paste blocker. (Accidentally posted it on the patch notes thread first.)

“Yes, I am aware, that I do have an event medal.
No, I do not intend to use it.
As I did not the previous ten times you asked.”

Is it just me, or do battles disappear if they aren’t selected? I think I had a mythic battle vanish on me, but maybe I actually did the fight and just didn’t notice (early fights go very quickly, and the constant jiggling of icons on the world map doesn’t help matters).

only their traits shoe that they are a “boss”

So that’s where the indicator is? Dang, I checked everywhere else.

Maybe there’s just something wrong with the skull progression table? It looks like the legendary level 60 battle should be 4 skulls instead of 8 skulls. Or could there be some weird condition that grants double the skull reward if met?

So that’s where the indicator is? Dang, I checked everywhere else.

It’s like the delve traits.
Mind you I only know this because I watched the patch preview stream. Not because it is clearly written… anywhere…(that I’m aware of anyway)

I don’t get it… which one should I take? There are 3 times Brawlmaster and every enemy team is slightly different… 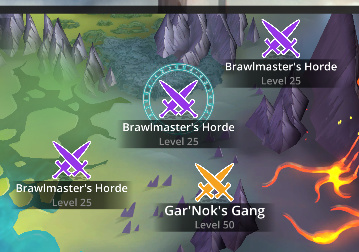 if I take the “wrong” one I’ll get less orc skulls?

Ah… I’ll guess I have to take the one with enemy-Fist of Zorn because he does more skulls… I’ll try it that way.

hm nope 3 orc-skulls… I give up and wait

Something is very wrong with the points totals. A guild needs 182,000 points or so to hit level 12, or just above 6000 points per player assuming full participation. The current global leader in PC/mobile has 3600 points after 87 battles won.

Buying to tier IV in the shop, plus six additional days of free sigils, gets you 42 sigils. Double it for Valravens, and that is 84 sigils. The current global leader has done more than that many fights, and has just over half the number of points needed for a guild to hit reward 12 if everyone has the same high activity level.

Its hard to give feedback given that the event is supposed to change each time.

After using all my tier 4 sigils for Monday:

I think if it told you how much score you’d get for doing that battle before you entered it, it’d be easier to plan accordingly outside of just play.

Overall, this event is… okay? Its not very memorable though and the reward loop isn’t all that exciting. The best experience in Gems of War is a variety of battles in a short amount of time and testing teams to see if they survive it (PvP for example, when not plagued with 1 meta def) … Repetition against the same enemies is the exact opposite of that appeal.

Not trying to (always) be down on the game, but after Raid and Invasion, this feels somewhat more of the same? Those modes have their fans, but I wasn’t really one of them.

It looks like you have to attempt to repeatedly hit the same battle, causing it to increase in level and grant more skulls. The skull progression table might contain some wrong numbers though.

I am sorry, but this event is even more pay to play and just as repetitive as any other event.

Is doing the same thing over and over supposed to be fun?

Can’t wait until raid and ToD gets replaced by these events. 3 out of every 4 weeks will pretty much be the same thing. The tokens will be called something different and the enemies will change but that’s about it I think.

Also the skull directly translate to point = skulls x 10
Why was there a need to introduce a redundant and repeated term? We already have a very prominent element of the game named “skulls”. 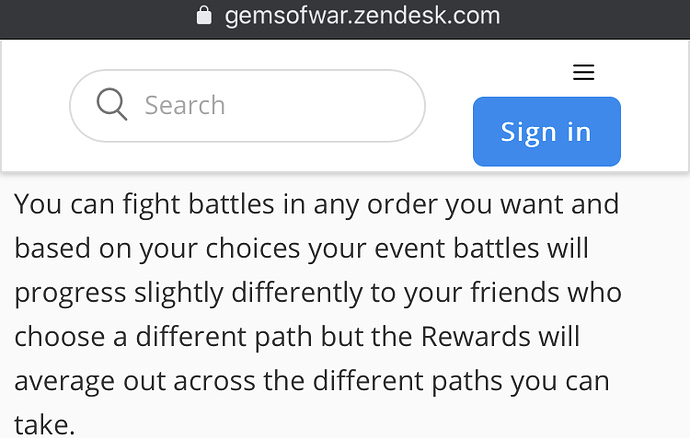 This is not averaging out over multiple paths. There is something else going on here that we are not aware of.