So I was tracking my data while farming for Celestial traitstones. The drop rate seems to have gone down the drain after the latest patch. Before I would comfortably get them by doing explore battles, they’d randomly show up in my rewards.
But now, it’s literally impossible to get them from explore. Did anything change in terms of drop rate?

As it stands now, from my numbers the drop rate is 0.2 %. It would actually be even lower if I kept tracking my battles, because basically I only got one more of them in the meantime, and that was from a daily event on the adventure board…

A limit on them basically limits progress in game. Let’s not forget that they are used for troop traits, crafting troops, crafting weapons - and ultimately, leveling up kingdoms with said troops/weapons.

Is this working as intended? Anybody else noticed this? 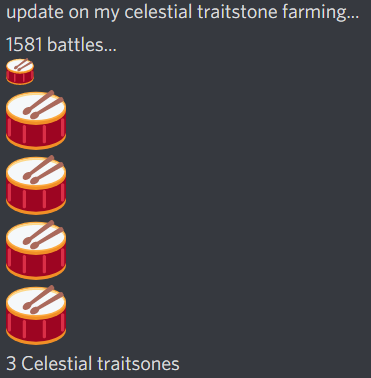 PPS: Yes, I also know you get some as rewards in events. Still very limiting.

PPPS: Using Orbs of Wisdom for traiting is also limiting.

TBH, I haven’t noticed because I haven’t done a lot of Explore since the change. The interface really grinds my gears because the number of popups are unnecessary (I know I unlocked the [mini]boss, because it’s the only thing available!)

However, I can say for sure they did muck about with the rewards, so that you get guaranteed Arcanes on at least the miniboss. It’s not unlikely this has had an effect on Celestials. Maybe they want it that way to create the jewel sink, as you mention.

Maybe they should create a new kingdom that is home to the primal, apocalypse and guild guardian troops…exploring this kingdom results in a celestial trait stone. While the celestial traits tones are technically a more rare item, the previous explore setup resulted in arcane stones essentially being more rare due to the amount you needed.

I got 33 celestial traitstones during the last gnome weekend in March. I had 1800ish trophies that week.

I did 3600 trophies last week and only got 7 celestial traitstones.

Definitely seems to be nerfed in some way.

if you need hundreds of thousands of recent fights to get resources that are ESSENTIAL to progress in the game… that doesn’t really seem right, does it?

I know what you mean with a large enough data pool. But there was an obvious change in the number of stones dropping, and by now I have over 2000 of battles. So yes, this is a large pool, when it comes to such a huge change in the drop rate! Plus, same insights from other guildies. I was literally pushing hard to farm them for the week with the Possessed King an the Doome d weapon in the soulforge in the same week. Eventually gave up and used my jewels…

Have you noticed any pattern in the way they drop? Did they drop from bosses only?

I’m also running extremely dry lately. I’ve seen a couple per week and have burned through my stock completely. Very disheartening it wasn’t mentioned in the most recent patch notes or added to the RNG of the adventure board. I really hope it was somehow unintentional and will be fixed somehow but at least if it gets added to the adventure board I’ll know not to be so loose with them as I was. It makes it really hard for new players to join if CTs were throttled because you need them for everything. At least if they’re intentionally throttled as hard as it feels they were we could remove them from troop and weapon crafting… I’m honestly afraid to 3rd trait things for kingdom power levels because I might miss a weapon or mythic I need.

We haven’t altered the drop rate of celestial traitstones.

While I agree that celestial traitstones are in much shorter supply since the change in explore mode, I don’t think that this is related specifically to the drop rate. It is just as likely that the drop rate hasn’t changed, but whereas before we were almost as likely to get a celestial as we were an arcane (i.e. a very low chance), we are now doing a limited number of battles with a guaranteed arcane at the end. You can accumulate a lot of arcanes pretty quickly, but the celestials are clearly harder to come by.

I really liked the idea someone floated above where there is a kingdom (or source, whatever is more realistic to implement) that can be farmed for celestial traitstones. Or they could be added to the pool of traitstones received in tasks (I don’t recall getting a celestial traitstone in an LT). Regardless, it would be good if we could approach this as something that could be addressed instead of offering one-line contradictions.

The drop rate hasn’t changed. I get them constantly.

This. Celestials do technically have a lower drop rate since mini bosses are biased towards arcanes now, but the drop rate per fight is otherwise unchanged. It’s that we’re doing far less fights overall due to higher difficulties. I agree that something should be changed to address this.

How about the mythic boss for kingdoms with the mythstones bonus will always drop a celestial instead of the arcane?

The drop rate hasn’t changed. I get them constantly.

Yeah, well, I have zero so that means the drop rate has been changed. This is sarcasm, but your argument lacks merit. Celestials are an issue for newer players far more than older ones, especially for weapon crafting, as all weapons could be obtained when they were released without crafting and thus without using celestials. Further, the explore revamp means we have had less time to build up our celestial stockpiles while it was technically easier to acquire them.

We haven’t altered the drop rate of celestial traitstones.

Ever? Across all modes? Are you willing to stand by this statement 100%?

I wasn’t kidding when I said I get them constantly. I get several every day. Maybe it has more to do with how much you play or what mode you play, but as far as I can tell, the drop rate hasn’t changed.

I’d say over 2000 battles in a week and a half is quite a lot of play time. With only 4 Celestials dropping…
Bottom line is this - last months I’ve leveled up tons of my kingdoms, and for that I needed tons of Celestial trait stones. All I had to do was run explore battles and I was good to go. Never ran short. Now, for the past 3 weeks or so, have not been able to level up almost any troop, because I have no Celestials… And I literally am in a spot where I’m thinking twice before spending any of them, in case a good weapon shows up in Soulforge…

I have not played a lot of explores the latest two years, so I can’t be much of help. But I have around 1500 in my inventory, most of them I got in the past when I went bananas in explore. I can’t remember last time I got one from the ranked PvP, but I neither do a lot of these.

I’m sorry you’re having such a dry spell. That still doesn’t mean the drop rate has changed. I can only speak from my personal experience, and for me it hasn’t changed at all.

Because I was curious, I ran the numbers. The odds of getting a Celestial are, if I recall correctly, about 1 in 200 for a PVP match. The expectation after 2000 matches would be 10 Celestials, sure. But getting 4 or fewer still happens 3% of the time—about as often as rolling a 12 on two six-sided dice.

And all that assumes all of your battles had the 1 in 200 chance; if you were doing lots of Exploring, battles with a guaranteed Arcane meant a guaranteed no-Celestial. This drops the number of real attempts from 2000 to something less, and increases the likelihood of such a dry spell over so many matches. Edit: I was corrected below.

Wait a second, wait a second - if a guaranteed Arcane means a guaranteed no-Celestial, then this does not mean that the number of real attempts decreases, it meas that the number of Celestials drops decreases… End of story. You can not say that the average drop rate is 1 in 200, but only those 200 that didn’t drop an Arcane… That’s nonsense. The drop rate should be reported to the total number of battles. It’s the same number of total battles. And if that was changed in that way, then that would be an indirect nerf to the Celestial drop rates.