Bugged Seals from Orb of Clans

I went through and opened a bunch of my Orb or Clans. I used all that I had on me. At least 8 Major and 21 Minor. Possibly more, last SS was from a week ago and I did get more.

If nothing else, it should show the same amount, plus what others have done, in both personal and guild.

How often does this happen? When did it begin happening?
Today.

Steps to make it happen again
Open a bunch of orbs I guess?

Just to confirm after some others used some orbs 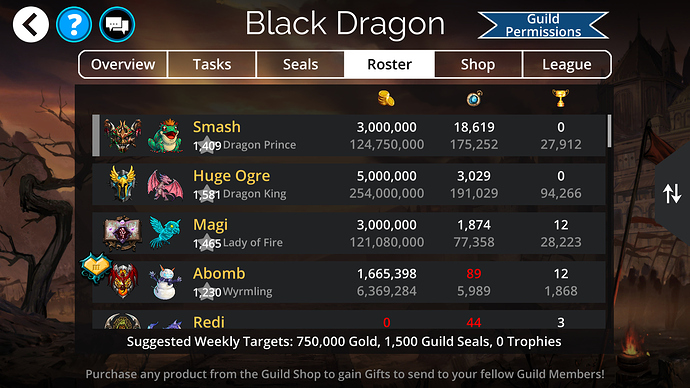 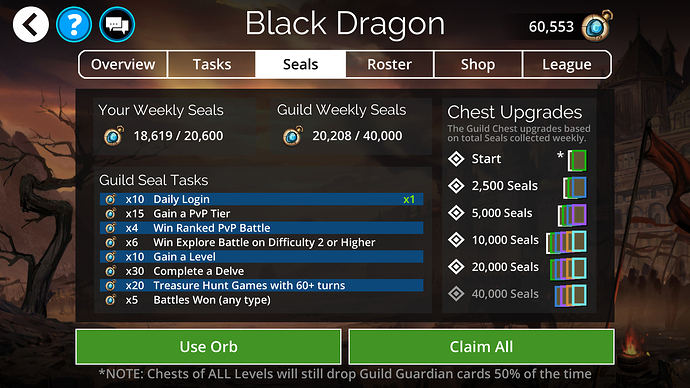 Just to be clear, you’re saying the seals you get from orbs don’t count towards the guild seals / guild chest upgrade, correct?

Just to be clear, you’re saying the seals you get from orbs don’t count towards the guild seals / guild chest upgrade, correct?

It looks like they might inconsistently don’t cont toward guild totals, which, while not as bad overall, is going to be a far more annoying issue to track and fix.

Unless there is just some unsaid cap on how much a single player can contribute to guild chest progress, even with orbs (like maybe 15k? try subtracting all your personal contributions above 15k and see if the numbers line up then), in which case the issue would be pretty obvious - that this was an intentional thing that wasn’t disclosed.

Haven’t played any matches. Only collection from me is daily amount for 19 seals.

I get the feeling that 1 of the major clans haven’t counted. But would need Devs to check to confirm unless someone wants to donate 8 to check if the cap is 7.

Haven’t played any matches. Only collection from me is daily amount for 19 seals.

We can’t see your entire guild’s seal totals at the moment of the snapshot, though, only the first five in the second snapshot. So if your run this again and add the rest of them, and your total guild’s seals contributions equals the amount in guild weekly seals plus 3619, we’ll know you were capped at 15k exactly. We’d also have a pretty good idea if you could play exactly one match and claim seals without your seals total changing, but it is going to be pretty difficult if other people are throwing in a bunch of seals right now too.

We can extrapolate, though. If the second set of screens is sorted by descending seals, the amount shown for top 5 combined at that moment is 23655 while your guild’s seal “weekly total” sits at 20208, a difference of 3447. The other 25 members in your guild have at most contributed 1100 seals at that point (all 44 or less), and likely less, making the amount of seals your guild currently wasn’t credited for at the time of the screenshot between 3447 and 4547, bare minimum way more than a single greater orb of clans and exceedingly unlikely for “uncredited seals” to have landed on exactly a value a multiple of greater orb (or even combination of any orbs) gave. Thats if the screenshot was sorted by seals descending for weekly and was taken at the same time as the one above it without exiting the menu, which looks to be the case since they are not sorted by level, guild rank, gold, trophies, or name.

I believed “everything above 15k on any one person” not being counted is a plausible guess because that would be 3619 seals at the time of your second screenshot, which fits into the range of “missing credited seal”, and makes a nice round intentional number (10 times the old max, this could have been in always and nobody noticed since nobody would do orbs this early in the week even if they did drop a ton of orbs).

I clicked collect all on what I had, before and after.

Just want to add, a guild mate of ours collected his seals for last week shortly before reset and they ended up counting for this week somehow, but only for the guild, not his personal total. So, the number you see missing should not be trusted.

I clicked collect all on what I had, before and after.

Thats still very weirdly specific to be a coincidence. Maybe make a mental note to check before and after tomorrows refresh and see if your guild total get credited the 19 seals after login (if you or your guild or both aren’t seal capped by then).

I’ll keep an eye on it tomorrow.

Hopefully a dev can give us an insight

We hit 40k seals so unable to test tomorrow lol

I can attempt this on the beta version, but not for several hours.

Any confirmation would be great.