New Bounty Troop: Ogress The Ogress from Broken Spire, is this weekend’s Bounty Captain. The Ogress will be available in the Bounty Shop, and will appear in Gold, Glory and Guild chests in 3-4 weeks’ time.

Can someone explain the name of Ogress’ third trait? It feels like a joke/reference, but it isn’t one I get.

But, if we realy want to look for any reference… Maybe GoT Hodor ? 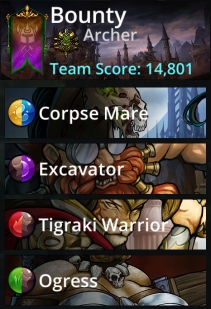 It’s not perfect, but the combination of Excavator’s Duststorm and Ogress’ explosions is kind of fun.

Also, just letting the devs know that you’re allowed to be consistent, we won’t get mad (promise!).

Also okay for there to be no more 100% guaranteed ‘summon on death’ traits after this (or, you know, any, but wishes just aren’t fishes, unfortunately).

(although yeah, I share Grundulum’s puzzlement over the third trait)

She’s a great troop as far as bounty goes. Nice mana generation and the explosion will probably remove barrier from the first troop, which is good since there are a lot of enemy barriers flying around this time around. 50% skull reduction is also handy for keeping her spell useful. She half mana blocks Tigraki Warrior but it’s not a huge issue with another generator since she also generates mana .

A good medal candidate as well if you have some spare Yasmine medals. The life increase indirectly acts as a magic increase through the spell boost.

Crysturtle, Tigraki Warrior, Ogress, and Rift Lynx is working great for me. I have Ogress in slot 3 so Tigraki Warrior can get a few spells off before Ogress takes the lead.

By far the best bounty troop released.
Like actual thought was put into it.

Even upgrading the troop to Gold level works with it’s cast. A flawless Rare troop.

Thanks for the share.
I’m not using the team but it did remind me about Corpse Mare. Which was a great fit for my true damage based team.

Have the opponents on Battle 20 of the Bounty always been Level 90?

I purchased enough shop Tier VI so I could get her to level 20 to upgrade kingdom and not have to use an ascension orb. And because you get so many sigils with that, you can also use your hero and still -easily- finish with sigils to spare (I’ve completed all Rewards and I have 6 sigils left, plus 8 more from Sat/Sun, and then Ravens from those fights – so a lot of overkill).

Yes, as far as I remember.

Ahhh, I see the disconnect.

Best troop that can be used outside of the Bounty.

Like one that won’t just be used for bounty events. Or guild wars green/yellow days.