Now that I was finally able to craft Pharos I tried all the teams that I saw out there with it (please correct me if there’s something better!). I tried the Elspeth/Zombie, all of the teams in Tacet’s videos and a bunch of other crap.

After stopwatching a good bit of them for awhile, the best team I found was actually a simple explore trait farming team consisting of TDS/Pharos/Fire Bomb x2. It has higher souls per hour than all the other teams I tested and has the added benefit of being a solid trait farm team. It’s more on par with the old Elspeth/Manacles team than the current Sunbird teams, but it’s not so slow that I ever thought I should be using Sunbird.

It’s just worth noting that one cast each from TDS and Pharos get you to 97/100 souls, so that’s basically the goal. Below is a video of 4 games in about 2 minutes, but when I’m focused it averages out to about 25 seconds per match. 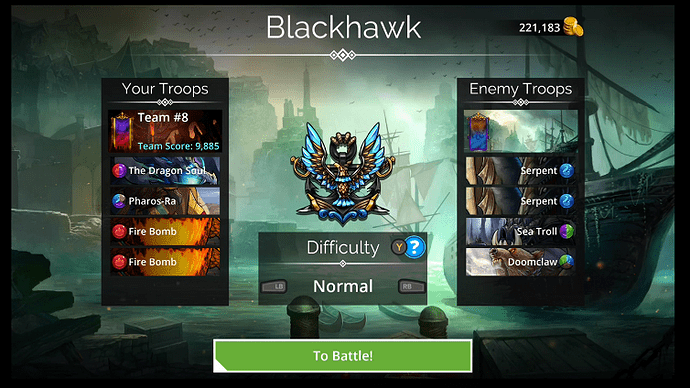 but before I had the two ra I used TDS/Warlock

I’m close now kinda, I’m at 400k with all the pieces made. Should have dawn by the weekend, but I"m running out of mythics to trait lol. The souls and traits are just kinda double motivating me though.

It’s cool to have it for the accomplishment but it doesn’t really do much for me… unless I play arena but that’s another topic.

TDS, Pharos-Ra, Aziris x2 with the Abyssal banner. Two TDS casts wipes most normal teams and gets me near the 140 soul cap. Necromancy and Magic Link on Aziris are pretty nice. TDS fills in two matches with overflow going to Pharos if you need another cast to finish off a mythic straggler.

That was actually one of the first teams I tried, you just can’t touch the speed of firebombs over time. No purple on the board in a single match drags the average time waaaay down, unless you’re fast at restarting bad boards.

TDS/RA/RA/Sol’Zara (or what’s her name?)

I use Elspeth, TDS, Pharos, Zombie on my alt account. Since I (intentionally) do not have defensive kingdom skill bonuses to fall back on, its nice to have a fodder up front. Elspeth misses suck, but if the board starts with few purple I’ll generally match any red I can before firing.

Yeah… It’s one thing to do it on normal, another on warlord1/2/3. You need a different team for those, since you might get a quick dragon soul with the fire bombs, but not enough damage output to 2-shot.

For a “speed” deck, souls per minute is the measure, not total souls per battle. It only makes sense to move up from Normal if you find the additional souls offsets the extra time it takes to finish the battle.

I “only” have two Pharos-Ras, so the deck with the highest souls/minute rate that I could come up with was TDS/Pharos-Ra x 2/Aziris.

I found that my rate (about 1k souls per minute) was about the same on Normal or Hard. Since Normal gives more battles per hour, meaning more traitstones, I stayed on Normal.

You can also try using Ishbaala with a Pharos team for a faster start.

For a “speed” deck, souls per minute is the measure, not total souls per battle. It only makes sense to move up from Normal if you find the additional souls offsets the extra time it takes to finish the battle.

This ^. Also, because science, I decided to do a more accurate test. Rather than extrapolate to an hour from 10 or 15 minute batches I did a full hour on normal and a full hour on warlord 1.

On warlord 1 I got 44,384 souls and on normal I got 44,000 even. I didn’t quit any battle I normally would have if the mana wasn’t on the board in an effort to remove any subjectivity from mana lulls. One time on the normal run I had a firebomb with zero red mana on the board lol.

In general I like the normal runs better, because it’s a high output soul team that doubles as a pretty solid trait farming team. Just a final note, I did all the runs in Ghulvania explore cause I finally pulled Titania this morning so got her all traited up while I was doing the testing :).

Also, because science, I decided to do a more accurate test.

FYI: There is a setting between them (Hard) that only increases monster Stats by 10% instead of 25%.

Plus some end gamers forget how much of a stat bonus they have, On my farm team for example I barely noticed Normal/Hard/Warlord I if I changed it.

Back when I was soul farming (feels like forever since I needed souls) I would always do it on normal-hard. Any higher difficulty than this I found may increase your souls per minute but at a cost of less traitstones. And trust me, you will fully max all your troops with souls WAY before you get them all traited.

Very fair points, would appear I have another hour of testing to do

You’re absolutely right though, for some reason I thought hard was a 10% across the board shift, I forgot that it was 10% monster strength for 25% souls.

Now, if we could get Necro on Dark Troll I think a lot of these conversations would change dramatically, because that guy would open some serious doors.

Only one Ra, so best I could do with what I got.

I do want a second and maybe a third.

Yes, that is my opinion as well. No point in getting a 4th one for now, the team would be way too slow.

If dark troll had necro I feel like so many things would change. Right now nothing competes with dragon soul but if troll had necro then the second best necro troop (ironically warlock) falls off the board and you start to actually be able to build full necro teams. Even without a crap load of Pharos.