I’ve been wondering for a long time about this, but what the heck is Behemoth’s spell art supposed to be?
Looks like a giant… mountain… something… erm… breaking apart in an… earthquake…? I think. What?
Is someone able to clarify? What do you see in the picture? 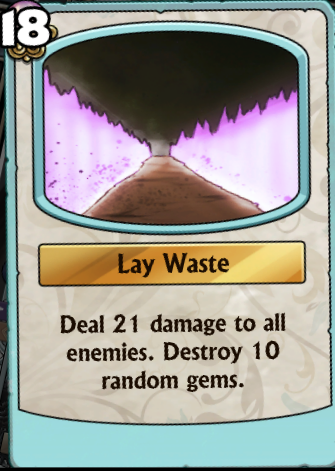 I’ve always seen it as a dirt path with purple flames either side of it.

I’ve always seen it as two walls of laser force field or something than closes in and destroys the gems.

I view it as Behemoth has laid waste to everything around him, except for the path needed to leave. Since i’m pretty sure he can’t fly, and looks like a heavily armored turtle.

Those are clearly flames of some type.

Yeah, you can even see the flames/explosions kicking little specks of dirt up.

Ah, flames seem to make sense. For some reason it always looked like a distant mountain/volcano exploding to me (the black stuff above it is smoke), lol

I always saw it as a furrow being ripped along the ground, with walls of energy blasting out either side… it’s one of the original spell art pieces from the game’s release two years ago and they didn’t always have the artists put in as much effort as they do now!

At one stage, I thought it was seen from inside the mouth of the behemoth as it spits out destruction (that might also explain why I always confuse behemoth with a dragon)

I always saw it as a furrow being ripped along the ground, with walls of energy blasting out either side

I have seen it similar to this.

Basically the behemoth charged forward, destroying everything in it’s path with fire/energy on the side do the the sheer force of his charge.

In hindsight, looking at the behemoth picture itself:
Breath attack lays waste through a path, with the sides catching on fire.