As a new player, every time I get a few keys i'm like 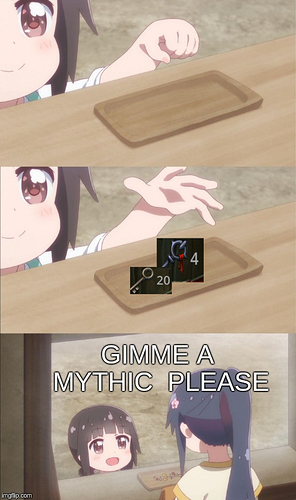 Everyone does/did that at least once

I’m far from new, and I still do it when my patience runs out. Aka pretty often

I do it everytime! I’m level 689 and still haven’t pulled a mythic from a chest. I joke Festival Cow will be the first troop to ascend to mythic from chests.

To be fair, my festival cow defence team this week has earned me so much honor

That’s exactly how you should behave when you are new and don’t have a high percentage of troops. No real need to hoard for the newest base mythic when you are missing most or all of them.

Somewhat counterintuitively, when you are “endgame” you wind up spending keys very infrequently, which is a bit of a bummer since the excitement of what you might get only happens occasionally. There will come a time when you too will want to save and target specific troops, but until then, enjoy your frequent lottery plays!

At what point is it recommended to start hoarding keys for new Mythics, and stop spending them as soon as you accumulate them?

@Voq - There’s no specific time, but, for me it was when I realised that I was spending a load of keys, but nothing was getting upgraded because I had all the troops received from chests already at Mythic level and they were just getting converted into Souls.

Now I save Gold Keys until I’m short on Gems or for Gold for Guild Tasks. The others are saved until there’s a new Mythic available.

Exactly what @Rockwell said. When you’re not seeing a lot of “NEW!” as you open chests, and there isn’t a specific troop you are chasing, it’s maybe time to pare back the spending until those monthly exclusive periods.

And even then, don’t go broke chasing a mythic, amazing though it might look. You’re much better off doing daily dungeons and saving up diamonds for the mythics that you really, really want. They’re certainly not all created equal, and being able to target specific ones from the Soulforge is huge.