This is by far the worst event they have ever brought in to gems. The AI is way over powered, they get mana after one turn and can kill you in one shot. I’m out of this event, never will play it again. Just my opinion. I’m OUT!!!

Good call, if it’s not for you, tap out any time.
I never touch Casual PvP so I don’t comment about how good/bad it is.
The event rewards could have been a lot better, but 1 more Chaos Orb is 1 more than 0, same for 60 writs, so I’m happy for the chance to get them if I wanted.

I don’t think the arena worth the time and effort, not without the option to use your classes.
Very slow frustrating battles and you do not even get class xp.
It will be a rarely touched event.

Its the worst event by far, no hyperbole.

If I want to compare it to other free events, at least Pet Rescues are short and Vault Events have a diverse playing field and are rewarding. Compared to paid events, at least paid events don’t expect multiple hours to unlock small rewards like 1 Orb of Chaos. (Delve 500 is player choice unrelated to rewards in the event itself). The closest comparison in time investment would be Bounty and at least that gives Major Orbs of Chaos among many other useful things.

I don’t dislike the new Arena, but the event itself is quite poor.

Like the arena “re-work” this is a huge swing and miss.
First of all, let’s bury the counter behind a pet rescue well over half of the player base has gotten to mythic already, so they have to waste MORE time to finish the rescue, THEN leave the game and come back, just to see the counter.
Apparently, the original problems with gnome counters did not register in their memories.
Then, let’s make the rewards so small that only people who like Arena anyway will even think of playing it.
And THEN, let make’s the scale so high you need 5-6 hours just to cycle through the rewards once.
Way, way, WAY too much work for 3 keys, 1 diamond, little over half a single deed and an orb of growth.
Fail.

I see a positive for next time it comes round…,

Played 5 games to get 50 Valor, looked at the reward tiers on the forums since there’s no way to in-game, and that will be the extent of my Arena gameplay outside Campaign tasks for the foreseeable future.

I prefer to look at the good side of things, but this “revamp” was disappointing at best. It’s sad to see the direction the past several updates have been going.

During yesterday’s delve event, a new Raider could:

Same amount of time spent in arena? Even with the reward breakdown by @Hawx and time analysis by @cyberkiwi, I wouldn’t bother to guess what he could achieve. It just isn’t worth the effort. 450 Valor for 60 writs. No thank you.

There are real reasons why this arena is not suitable for alot of people, but claiming its too hard… then dont try GWs as a game mode either. maybe something like cookie clicker would be more your style?

I like this game a lot but I am concerned at the recent direction/content and decisions being made. The amount of time needed to earn the rewards from this event is shocking.

Thank goodness it’s a vault weekend. I’m looking forward to my 3 day grind without an epic vault key. I think that was the first of many bad decisions recently

And if you think this one is bad, wait until they FORCE a troop on you on future arena events. It better be epic good in arena or it will only make this event worse. 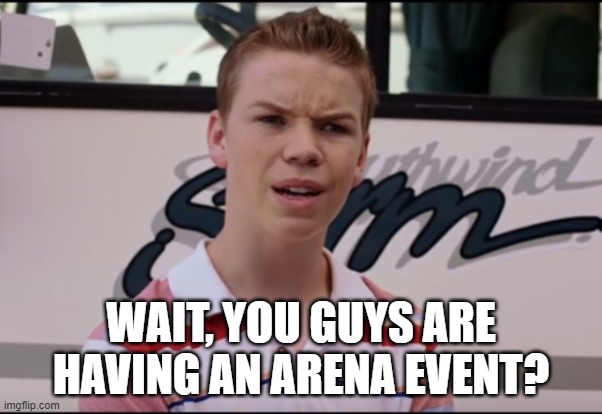 I repeat what I’ve already write. The revamp is good and balanced. If they want do a random day arena’s event like today or the 26th october, it is fine, it is a plus in the game and all people can play this event or not, it is an our choice. The real big problem is in the weekend’event rotation, it is a real big nerf for obtaine chaos orb. For example: in the last weekend’s rotation with 5 event we take (probably i miss some orb) 4 orb from delve, bounty i think have 4 orb 2 major orb (a major orb it is like 4 orb), vault (depend how much do you play) we can ipotize 0 orb too, invasion 5 orb plus a major, raid boss 4 orb plus major. If you dont receive any orb from vault you take 6,6 orb for week. With the new arene, we have a rotation with 6 event. We can ipotize, an average player, can obtaine 2 orb from weekend event playing 2,5-3 hours for day. So you can obtaine 5,8 orb for week, one less every week. I can understand, a free to play event where you dont spend gems cant have the same rewards, but i dont understand why are nerfing the orbs reward. They should let only a random one day event.

Yes sir, an event so poorly executed one would not even realize there is an event happening. Win arena enough times they will send you stuff in the mail.

Event buried under an all day long Pet Rescue, until you complete it AND restart the client (never gonna happen under normal circumstances). News buried behind the others in the in-game section. No news on the site. No announcement thread on this forum.

It is almost they realised it was so bad, that they were ashamed to publicize it, lol

Anyhow, most ninja event ever.

Event buried under an all day long Pet Rescue, until you complete it AND restart the client (never gonna happen under normal circumstances).

I agree though it’s stupid that pet rescues overlap the counter.

For sure my least favourite event ever.

Not a big deal though, I can just ignore it. The rewards are not substantial enough to fret about it. Though as Schu pointed out, the weekend event will be more problematic unless something changes.

Why were time and resources even used to make this event? It’s depressing…

Forget about how deplorably bad arena is, and anything to do with it …

I can’t find a shred of evidence that this thing is even running right now, with the sole exception of a pane in the current news area that can’t be seen without scrolling. There’s nothing in the “events” part of that menu. There’s nothing in the GAMES menu. Arena itself doesn’t say anything about it. There’s no official announcement on this forum. Nothing. I wouldn’t even know if it weren’t for the forum threads complaining about it and my guild’s Discord server complaining about it.

I am told that this can be unlocked in the games menu after doing the 24h pet rescue. Another event I understandably would never actually touch since I maxed that released-with-that-feature pet a significantly long time ago.

Yes, it’s the worst event ever. I’m fine just ignoring it, but I mourn the wasted development time. Why create something like this?