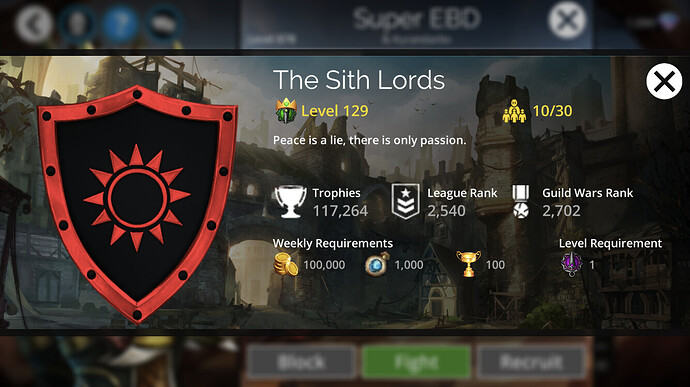 My guild is “The Sith Lords”. Been around for bout a year or so. It’s tough to find dedicated members. There’s the core 5 of us. We tend to finish all the guild tasks up to the 100,000 to 220,000 mark. But aside from us it’s often a revolving door of people coming and going at the bottom.

I suggest a merge, in the chance that perhaps there are others out there in the same boat

If you use Discord, contact me MadKing#0962 or The Golden Keep

If you still haven’t found a guild, Prancy Pants is cleaning house tomorrow morning and there will be room for 5-ish people. Can always contact me pm discord blindnight#8999

@SuperEBD feel free to message me if you haven’t found someone else yet — we could easily merge with a 5 member guild if you play on Xbox!

And the guild you’d be joining already has fully leveled guild statues, completes the blue task each week for gems, and is in the top 75 Guild Wars Brackets

@SuperEBD, if you’re still looking we could find a new home for your players in the Gargoyle Family (PC/Mobile). We have two guilds, both with fully levelled guild statues, one with optional Guild War participation.

If you’re interested pop into our Discord at Gargoyle Castle 4.0 and have a chat with Selene (edit: or contact Selene directly at SELENE#7027).

Well, it was more my hope that I would be able to absorb up anyone else in the same boat, rather then be the absorbed.

It’s a shame that there isn’t a merge guilds game option which moves all players and lets them keep the history of their contributions and their length of time with the guild, keeping things a bit more equal rather than having a proud guild abandoned. [It won’t happen, there’s no financial gain for the development effort.]

Good luck finding more players for your guild. But if you’re keen to get to a point where you can complete events and stay with the guildmates you have bonded with over the past year then being “the absorbed” is a much quicker path. Gargoyle and the other fine guilds above would be happy to talk to you, and hopefully you’ll find a good fit.

Maybe if you describe your guild a little more, you’ll be able to find guilds less-progressed than your own that would rather be absorbed than build themselves up? Then it’s easier for potentially interested parties to know if it’s a Win-Win scenario for them: you get the bigger roster you’re after, and they get better guild statues, for instance, or more tasks completed each week (this is why I tried to give some details about how, if you merged with our guild, you’d be gaining Guild Wars Brackets, Guild Statues, and Tasks, while I would be gaining 5 dedicated players to help us continue our progression [when Wars will get harder to win, and also to have more task completion]).

It’s rare to find a guild willing to merge at exactly the same progression level— and at that point, how is it fairly decided who becomes GM and such? It’s harder to create a Win-Win scenario at that point, is all.

I say this as a person who merged his own guild into a larger network after it had absorbed a few smaller guilds; we absorbed smaller guilds, and then once we were a strong guild we were absorbed into a guild family. But that’s basically how leverage works: Big “eats” Small.

But in this analogy try not to think of it as predatory—it’s not the strong taking over the weak, if done right. Instead of predation the goal is mutualistic symbiosis: the remora (small guild) that gets carried to its destination much faster than he could ever swim himself by the shark (which is the bigger guild). In return, the shark gets her parasites cleaned off her skin; in other words, both parties benefit.

Because you have to be able to offer something to the absorbed that they wouldn’t have otherwise because if you don’t what incentive would anyone have to take the offer?

Well, it was more my hope that I would be able to absorb up anyone else in the same boat, rather then be the absorbed.

Good luck in your search

If you still haven’t found a guild, Prancy Pants is cleaning house tomorrow morning and there will be room for 5-ish people. Can always contact me pm discord blindnight#8999

Prancypants GM here. Feel free to send us a message. We have a core group but kick heavily every week due to the revolving door you talked about.

What are you looking for in a guild? May want to update your post with that. For example, Prancypants requires events but not Guild Wars. If your core group loves guild wars, it isn’t a match.

What are your current guild requirements, or at least, what does your core group want, besides from the gold/trophy/seals in the image? That will help all us responding GMs know how to help you the most.

Do you still want to admin the guild? Some guilds have several leads, others a dictactorship.

Either way, best of luck!