Any tips for the upcoming Vash'Dagon troop?

Also because I want to get Karakoth above nine stars. (I am still quite a few ascension orbs short of Zuul’Goth.)

I think this troop could be fun to use and he’s certainly different. Gimmicky for sure, AI probably won’t use him effectively on defense, and he’s a liability in GW because he kills troops and lowers your score - but with all that said, I still hope I get the chance to play around with teams using him.

He probably won’t be in any meta teams but he looks like he could be pretty fun for a change.

Use Vash with Irongut in delves as a curse slave
Use Vash with MC/Apo or MC/Harpy Mage with Brown spam and sacrifice a Frostfeather or Lust.

As long as it has a 3:1 Boost ratio, it won’t ever do good damage for the effort you put in.

There’s one problem that could possibly happen when using Vash’Dagon for delves; After he devours the throw-away troop and if he happens to summon one of the six Daemons with Impervious then that’s pretty much it for the rest of that run. The risk just outweighs the reward imo.

You’d never cast him in a Delve. Havent tested it, but I’m tempted to say the team devour would count as a death in a deathless run. 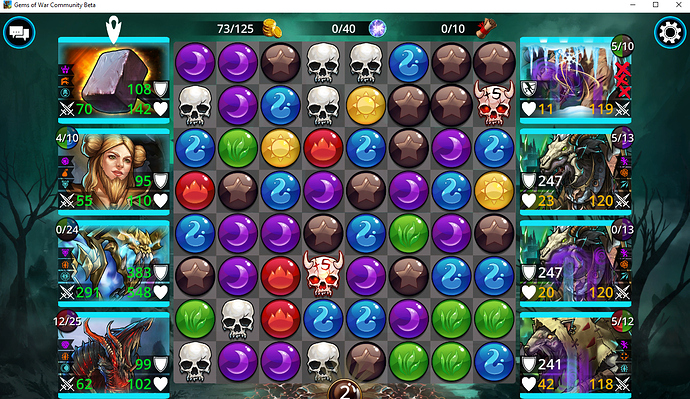 Passive curse is very nice if using along with Irongut.

The lack of a cohesive kit on this troop is extremely disappointing… not just the overall “power” of his spell. For now, Vash’Dagon looks like a dead slot to have a curse bot and little else… unless you want to sacrifice two team slots for subpar spell damage. Curse is powerful, but is it that powerful that the spell had to be made completely non-synergistic and weak? Going to be even more disappointed if we get a legendary with a board mod spell that can curse on 4/5 later on.

Black Beast was one of my favorite troops for a long time, so I’m obviously going to try to make something work, but I have a feeling it will just make me want to use Black Beast teams again.

Vash’ Dagon up front with Harpy Mage isn’t that bad.

The damage from Vash’Dagon is complete ass, but at least it can do some decent skull damage. You can maybe replace L&D/hero and use something like The Wild Queen and use the hero with Deathknight in the 4th slot.

Edit: The whole can’t devour ally impervious troops is a huge downside. Vash eventually summons in troops it can’t interact with. Vash also can’t devour a barriered ally currently. Its in need of a dire buff.

When an Ultra Rare troop is a better version of a Mythic, something isn’t quite right.

Vash doesn’t seem great, but looks to be clearly better than the last couple Mythics we’ve gotten. I’d think it would also go well with troops that heavily depend on status effects to be good - think Mab, Khorvash, or Magnus.

After using him for a bit. He would actually be pretty cool/fun and I don’t think OP if his power was unrestricted, except vs devouring himself. His power should override things like impervious since they are your allies. Devs pleaaase.

Very true. He needs dispell b4 devour.curse should activate on it or something.

Yeah if it just said like, “dispel, curse, then devour and Ally…yada yada… Cannot target self”, he would be a really good option for grinding casual pvp battles and I don’t think he would be effective on pvp def or anything so it wouldn’t be OP.

With this build, the hierophant’s third trade seems to really like proccing and putting bless/ barrier on leprechaun, who I’m trying to eat

Try Vash with theif hero class and summons. I haven’t tried with hierophant class yet.

I have had a very long run of 3t as they come wins with this. Use Lep to fill Crusher/Vash. Use Vash on Lep asap. Reroll devouring the spawned troops. I do not use spawned troops. Titan is a must and upgraded Crusher to at least vi. 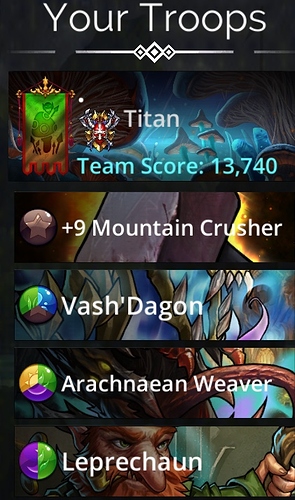 I run a PVP team with Vash and it works pretty well:
Titan

Obviously do the Great Maw devour, then devour him