Any idea on when this is coming?

The triple kingdom rewards have been in “coming soon” status for a long time now, as far back as I can remember actually.

Just wondering if anyone can give some insight to this that is in the know.

when there will be enough troops in kingdom.
“coming soon” is misleading

It had been levels 8, 9, and 10. Then when enough troops were added so 8 stars could be hit, they moved it to just 9 and 10 stars. So as we get enough troops to hit the next star level, they’ll remove it.

You need 19 troops to obtain the 9th star and 24 for the 10th… From the spoilers, even at the beggining of next February, none kingdom will be able to have the 9th star…

The main reason is a reduction of points after the 10+th troops (almost divide by 5). So you need between 4 and 5 new troops to increase your kingdom power level: 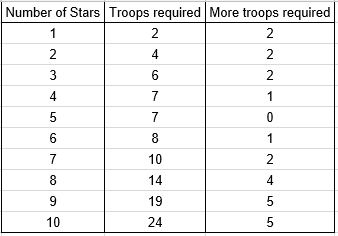 Something should be done either:

They could also count hero classes as a troop for the kingdom the class belongs to. Not much of an improvement, every troop counts though…

I did a mistake oups

So we need only 17 troops for the 9th star and 21 for the 10th… Next week we will have enough troops to power level one kingdom.