So I thought maybe I’m just an idiot and that may very well be the case. However I’ve been seeing the AI do a bunch of things it hasn’t done in the past. Was playing a Mab team, on the AI’s first turn it matched a single 5 gem than a 3 gem before returning the board to me. But instead of the AI freezing 1 card it froze 3 of them instantly even though Mab’s trait says freeze an Enemy not Enemies.

Next I was soul farming with a mostly purple and red team. My bottom necro card got frozen, however my TDS on top wasn’t frozen, yet for the rest of the match the AI refused me all my extra turns. Mab’s trait doesn’t say anyting about freezing a Mana color it says freezing a card. For all intensive purpose that Necro card sits there unused and TDS does all the work. This to me seems unfair that you can freeze another similar mana card and just remove all turns for any other card using the same mana color.

I’ve watched Mab twice pull an extra turn when there wasn’t 13 blue gems on the board. Yet she casts and up pops that extra turn.

Mathmatical equations are always specific, to deal with having a decimal and a ongoing number it simply makes sense to round up or down. That is a the one thing you can truly enjoy about math. Why is it when I soul farm I can pull 85 souls and still get the same amount of souls at the end of the battle as if I farmed 100? My total bonus on Warlord 2 is 395%. However if you multiply 85 souls with 395% you don’t get 395 souls. You are suppose to get 335 souls. Yet the system seems to just max it out and give them to me anyways. Hey I don’t mind the bank erroring in my favor but math is math and it’s not helping teach our children proper math if the game can’t do a simple equation and come up with the right answer.

Would a Dev please tell me what is the chance percentage really suppose to be on stone farming? I’ve had multiple runs where I would farm upwards of 15 matches before I pulled a single runic. Now that’s not the issue. What is the issue is for those 15 matches I wasn’t even pulling a major stone. All 15 were minors stones in a row. So when you put 1x, 2x, and 3x on stuff and a person gets 15 minors in row it’s really discouraging to stone farm when you see great odds and the truth of the matter they are far from it.

In your first scenario were there more than one mab? If so than one troop would be frozen for each mab opponent has. If there was only one enemy mab then… Idk thats weird but i have seen strange things lately as well such as 4 red gems in a column that the ai generated didnt match and were left for me… 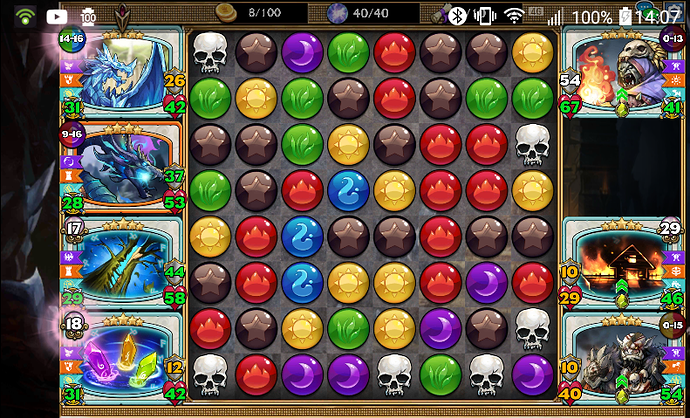 In your second scenario that is how frozen has always worked for me… For instance if i am using one of my GW teams and the last troop becomes frozen, because it shres a color with the other 3 troops any 4+ match of any of the troops colors will result in the loss of the extra turn

As for the 2nd yeah its always been that way for me too. I just feel that if you are going to do that then have the card worded that way. Otherwise fix this because you are freezing that card not it’s mana color. By freezing the mana color you are effectively killing all other cards that share that mana color as well and that is not what the description of Mab’s trait is.

Funny side note, you can entangle a card that has immunity to entanglement only if that card is stunned. With that said I had a round during GW’s where I stunned Mab then used the dragon that freezed everything. Every card was frozen except Mab who was stunned but not frozen. This AI seems to make up it’s own rules.