I’m at a point in my Kingdom progression where I have multiple strategies laid out ahead of me I could commit to either advancing Kingdoms equally across color of Books of Deeds, or I could focus on one kingdom, Karakoth, to work towards getting it as high as possible towards Kingdom Level 20 and 30 Kingdom Stars for those sweet permanent Magic bonuses.

Attached is a screengrab showing all of my 26 Star Kingdoms and their respective Kingdom Level. 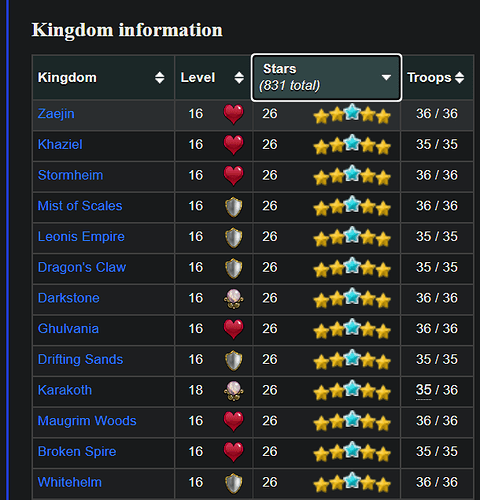 I’m leaning towards an all out Zerg rush on focusing Karakoth, especially since Karakoth seems it may have a Kingdom Reboot upcoming sometime this year per Taran’s, making some of the higher Level and Star requirements conceivably attainable.

However, I also have enough green Books of Deeds and Imperial Deeds to start working on Zhul’kari towards Kingdom Level 18 as another option that keeps me from getting bogged down waiting for purple Books of Deeds.

Any advice would be appreciated.

I won’t call the below advice, but it’s how I choose to go about this issue:

My method is that I don’t consider spending Books of Deeds until I’m blocked from kingdom star progression by nothing but the lack of having done so. I’ll push the kingdom to power level 15 when it releases, but I won’t go further until I feel the need to do so. The necessary resources simply aren’t available in suitable quantities to do otherwise.

The colored Deeds themselves are too sparse, and that includes the possibility that I’d convert the Writs I’m sitting on to the required color. Imperial Deeds are relatively thin on the ground. And if I had the choice between pushing one kingdom from 16 to 18 or using those same resources to push multiple kingdoms from 15 to 16, I would pick the latter on account of how that’s more useful to me – the boost to Explore efficiency (15 → 16) outweighs benefits like Hoard bonuses (16 → 17) when I’m already sitting at 90k renown.

I have two kingdoms at Power Level 18. I could probably push a third kingdom from 16 to 18 if I wished to, but I don’t yet feel the urgency to advance those kingdoms from 26 stars to 27 stars when they’ll be stuck there and I see no current indication that they could advance beyond 27 in the near future. (The 27th star just isn’t valuable enough to me.)

For some additional context, I have all Kingdom Levels to 16 with Karakoth being 18 as the only one higher. All others are equal and it’s a matter of going from 16-18 for the others, or focusing on going from 18-20 with Karakoth.

I did your method to get all kingdoms to Kingdom Level 16, and am just now wondering if I should switch up the strategy since going from 16-18 on all kingdoms will not only take a very long time, but also doesn’t give any real tangible gains like pushing towards 30 Stars of Level 20.

I go for spreading across the board instead of banking all on one kingdom - slowly going for level 18 in kingdoms where I have 14 upgraded weapons (and can reach 27 stars) so that it wouldn’t trigger most awful ingot daily offer.

Maybe it’s just that I’ve never understood or been a stat point freak but to me it seems that at endgame +1 stat point will be irrelevant at least 99/100 times whereas +tribute chance/+tribute reward gets used every hour.

My “additional context” would be thus:

I have 14 kingdoms still sitting at 15. I’m probably closer to having the quantity of colored Deeds to raise some/all of them to 16 than I am Imperial Deeds, although my supply of the former lags a little bit because I spent many years in a casual guild that didn’t finish statue tasks and therefore denied me that trickle (plus not getting the Books of Deeds from the Hellcrag Journey event).

But to the question of 16 → 18 vs. 18 → 20? I suspect it’s going to be a fair amount of time before we approach the point where 20 will be necessary for kingdom stars; Taransworld suggests that’ll be 30 kingdom stars. It’s also roughly twice as expensive to do the bigger number, so you’re likely to see “more bang for your buck” putting two kingdoms to 18 rather than trying to put one to 20.

I believe we’re probably at the point where we need the developers to make Deeds more plentiful within the game’s economy. Or getting very close to it. That day can be deferred for a while longer if the developers focus on those kingdoms not yet nearing 26 stars, but it’s probably a “sooner rather than later” thing when a large number of active players will be completely stymied from progression.

Alas, I’m not very confident that a viable solution will be offered. It would probably be a “Writ Gnome” that doesn’t begin to offer enough quantity to matter, not to mention that it would dilute the gnome pool further and be impossible to find.

Personally, I’m going for magic kingdoms to level 20 first, starting with Karakoth and Zhul Kari. Several of my favorite Explore setups would benefit greatly from having even just a couple more magic points. I already have all kingdoms at level 16, and none of the level 17-19 bonuses would help me that much. Sure, getting kingdoms past the level 18 roadblock would allow for bigger tributes, but I’ve already got plenty of gold, souls and glory. And gems aren’t much of an issue for me either, now that the new forging and minions orbs mean that I can spend a lot fewer gems on TOD events and buying pets.