some 5-10 delves are impossible to finish wout potions.
i got frostfire up to hoard level 290 or so before i gave up and did it on a tuesday.
making weekend delves and giving a potion for others is definitely a plus, esp considering they only give three sigils a day.
for a new player, that’s. 1750 levels to do at 3 per day max.

Yeah I’ve had the same issue with enemy Detect-o-bots, it’s super boring.
But what I’m saying is, Thrall is on MY team. I have a spell ready that will kill the last enemy, but the AI thinks I need more mana or something so it just casts my Thrall over and over. I don’t get it.

but the AI thinks I need more mana or something so it just casts my Thrall over and over.

thrall clearly paid off the AI to be used more.

Hung at boot – during “Loading Assets” – after update to 6.3 on my partner’s iPad; uninstall + reinstall seems to have fixed it.

Yeah, I don’t “get” how the AI prioritizes whether to match or spellcast, and even which spell should be cast first. Often you can expect it to spellcast once charged (after checking for extra turns) but this is not always the case, and sometimes it even ignores extra turns.

As for the update post itself, I’m actually kind of curious about the permanence of Delve potions (Hoard Level 100+), i.e. if you can turn them off. (Of course, why you might even want to is up to you.) 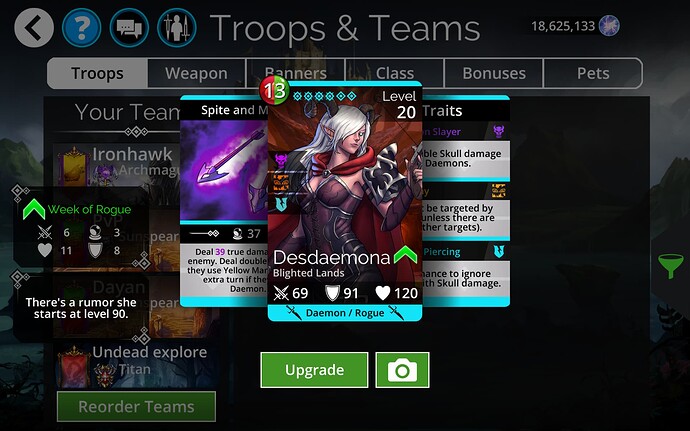 While I cannot personally, I have passed it on to those who can!

The Gnome is unknown until players enter the battle.

So I’ve read this multiple times, and am still unable to see how is this worth 2 delve attempts + 10k gold (assuming it’s a normal Loot Gnome with no unique drops) outside of very niche situations where players have no time to do all 3 daily attempts.

Is it primarily a smokescreen to justify the new Delve Attempt Offer gem sink?

It’s their attempt at trying to save Delves from obsolescence once you complete everything for them.
“Everyone loves gnomes, so just make a random gnome appear!”

Given, I will probably try it out to see if Cursed Gnomes show up.

Pet Gnomes will not appear in the Gnome Treasure Room but Cursed Gnomes can.

Are gnome chances the same as in Explore? Meaning very low chance for cursed gnomes, but at least a reasonable chance for verse gnomes?

FYI in steam the screen cuts off so you can’t see the [+] to buy more sigils. Sometimes full-screening the window will fix it, but not always. 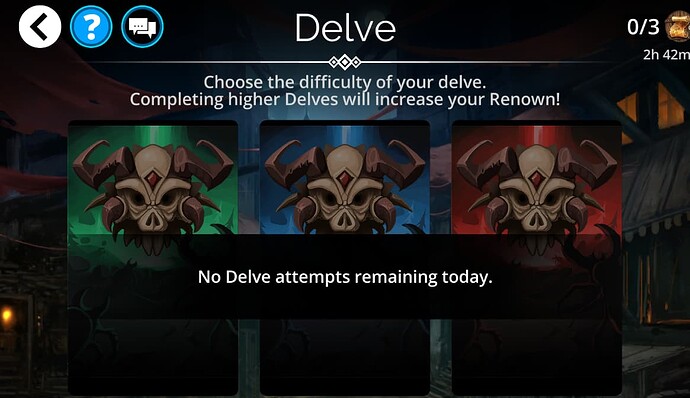 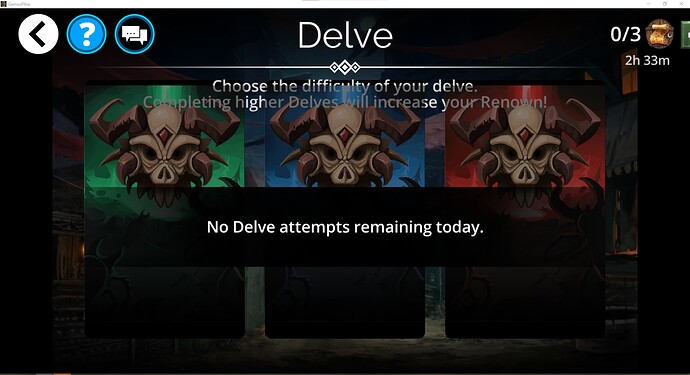 I’ve always played in a window (1280x720) so I can move it to the top right corner. I watch Youtube and scroll forums/discord at the same time.

Anyone having a disk read error after updating? I put an exception in avast for steam and gow. If I turn off avast it works fine. I haven’t found a work around beyond turn avast off. @Jeto

Post update May 29, 2022. I want to be honest. I played auto play and it is horrible on 1.5x speed and takes forever on difficulty level 12 explore! We can use every other speed on all the other stuff like P.V.P. Guild Wars Ect. And x4 is what i used to, and I am level 1,455 i got used to x4 speed and can’t run gems of war on any other speed because to me everything else is slow! Well and i wish we get rewarded a lot more gold in P.V.P. battles it takes forever to even complete the guardian task with just 9,000+ gold each win. And yes i know 30 players with a full week of non stop gaming brings in a major amount of gold but people work, go on vacation, get hurt and can’t play, so not everyone can enjoy the full benefits of gems of war. ALOT of guilds suffer because no one joins and stays to help anymore. A few might stay but the overwhelming stress takes hold after a while because they tired after just completing the Blue Guardians 12 task! I wish we could have 25,000 gold when we win a P.V.P. match it would make everyone LOVE gems of war more if their was better rewards to balance the scales. Again i just being honest and not insulting the staff of gems of war. I would love to see major changes to rewards and love it to be fun again for everyone. I want everyone to enjoy getting more rewards with more gold and please for the love of god update the drop rate so there be at 25 % chance for each rarity type troop.0.01% and 1.67% chance to get a mythic is horrible! Please do a mega update on drop rates.

Tried to play a delve with 207 hoard at level 50 (leftmost option) and did not see potions applied. Do potions apply only in the central and rightmost delve options?

I don’t really understand the point of doing a deep delve other than the achievement and a new troop. I see that you get a higher multiplier so you have a better chance at a better chest at the end but is there any real bonus? Is there another hoard mimic like troop that only drops from a special gnome in that special gnome room? Is there a reason to beat a PF500 deep delve?

Not trashing it or anything but it seems like a weird thing to add if there’s no extra reknown attached to it or a troop or some kind of reward.

Just downloaded the update on Xbox (searched for it and manually downloaded it). If you try to auto-battle an Explore battle, the Luther tooltip comes up, but can’t be cancelled/bypassed. Tried pressing all buttons and can’t get out of the tooltip. Had to quit to dashboard and shutdown game. Restarting the game, tried to go back into an Explore match and setup an auto-battle, same thing happens again.

Edit : Tried again this morning, and the issue seems to have resolved itself? Did the exact same process and this time the buttons went through the tutorial as they usually do. Strange that it repeatedly wouldn’t work last night, but at least it’s working normally now!