As you can see the skull hit should only hit for 15 but it kills the full health (20 total) Peasant outright.

I’m on IOS but Steam players are reporting it too

In 4x speed, all skull hits are amplified. In Arena, apparently, the skull damage to the first troop is bleeding over to the second troop too. Like it carries over.

Thank you so much for you help, it’s greatly aprpeciated. Our team is seeing what they can do as we speak.

Another one. 16 health troop dies to a single skull hit from an 8 attack troop.

Mana Surge Gnomes will be added as a possible drops to Cedric’s & King Cedric’s loot at weekly reset next week.

@Saltypatra What is the drop rate for these gnomes? They are epic rarity so I imagine harder to find than common gnomes? 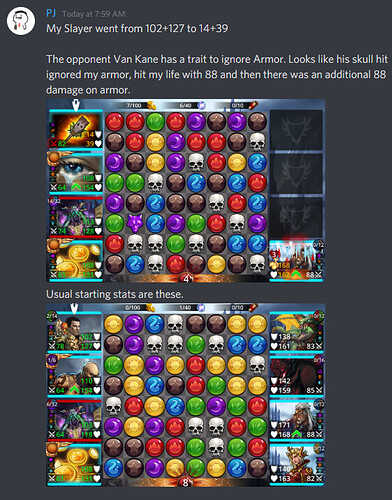 Hmm, I don’t see anything wrong with skull damage on either PC (Steam) or Android.
Playing at 4x in Arena and PvP.

I’m seeing the double skull damage on PC/Steam at 4x speed: a Volcanic Golem in L12 Broken Spire explore ripping through my entire team with skull hits that should not have one-shotted them but did.

(Also saw it do the double-kill a couple of times.)

There was another issue reported recently that was specific to 4x speed I think?

** Platform, device version and operating system** Steam, PC, Windows 10 Screenshot or image https://prntscr.com/1954li7 What you were expecting to happen, and what actually happened Finish a explore battle in Suncrest but the game freezes. How often does this happen? When did it begin happening? It happens consistenly every time devouring a troop with Vash dagon to kill Harpy Mage (as the last troop in the enemy team) and her trait “Deadly Flock” activates. Steps to make it happen again …

Could I please get information on which game modes are experiencing this skull damage bug in?

Is definitely happening in Explore on PlayStation too.

I don’t see it mentioned in the notes but Lycanthropy gems are now being converted when purple gems are converted. This is a good thing.

Could I please get information on which game modes are experiencing this skull damage bug in?

Could we please get information about which game modes the changes were tested in?

How could the “fix” for banner count possibly get screwed up so bad?

How was the new skull damage calculation verified and validated?

Was feedback from the beta testers included in the decision to introduce the mana-drain mechanic on board reset?

Thank you for this additional information @Skszp.

Another quick question, is this troop specific or all troops on the AI’s side? I just want to confirm it’s every troop for the devs.

While testing, I reproduced it repeatedly through a couple complete delve runs before switching to E1 to continue. I saw double skull damage triggered by probably at least a dozen different troops.

Also happening in the world event battles, on PC/Steam.

edit: Only the AI, by the way. My skull damage is not doubled, with hero or regular troop in 1st slot.

Thanks for the continued updates.

So this is affecting all AI troops on 2x-4x speed.

What game modes are you encountering it in? Earlier it looked to just be explore, but now there are reports in Delves and world event battles. Are there any game modes this is not currently affecting?