Figured we can move discussion here rather than in the streaming channel, so people have a place they can vent and discuss the changes.

5.0 Update Preview Stream Notes Credit: @Redi1 for the stream screen captures. Stream has completed. Please free to call out errors or any significant omissions for correction. This update, as a major update, contains changes that many will find controversial. Please create new threads to discuss these changes to better focus discussion and feedback on each of these changes. Thank you for your understanding. – A Recap of Past Major Updates to Gems of War 5.0 is a major update to GoW. Ma…

To clear up some things early…

The top row will be gained by everyone completing the campaign. The bottom row (containing some troops, weapons, and pets) will require the Elite Pass. Elite + Pass will give extra stars to get some rewards early and extra rewards past 1000 stars. 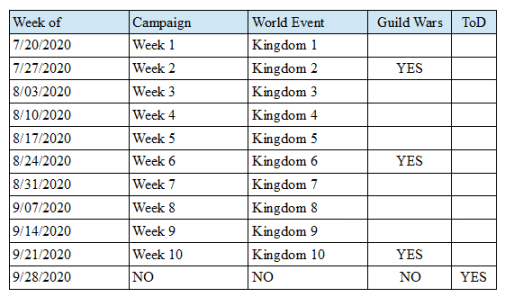 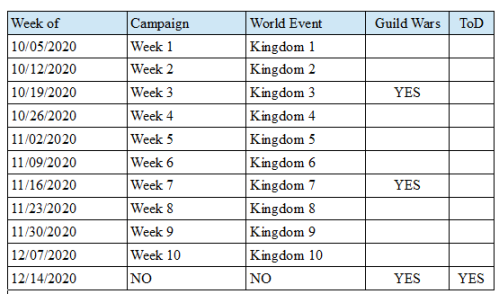 This is the new schedule but does not show weekend events since we dont know all of those.

Yes the stats gained from the Artificat will be in ALL modes in the game except Arena. That does include Guild Wars.

Artifacts expire “at the end of the campaign”. Does that mean anybody without the Elite+ Pass will be able to enjoy the full bonuses at best for a few days instead of a few weeks?

yeap thats how it works.

Does that mean anybody without the Elite+ Pass will be able to enjoy the full bonuses at best for a few days instead of a few weeks?

On a more general note: I’ve made it pretty clear in the past I’m F2P and that I’d buy Deathknight Armor if it were retroactive. Everything else was too expensive.

$1 a week for a guaranteed mythic in addition to the once-a-month mythics seems like okay-value for the money. I don’t know if I can afford it, especially with Covid considerations, but. I’m actually considering it since it’s not the exorbitant $50 for one mythic (as in the current shop—which only recently was made to be a new mythic, mind you) that I’ve always felt was ludicrous. Depends on if I want a birthday gift on my actual birthday this year, or if I’d rather stretch that gift out for myself (probably only if the content looks like stuff I’ll actually use, not that anyone asked or needs to know my meagre fun-budget particulars

Any campaign without this mythic incentive (probably) wouldn’t be, for me.

My only real complaints (sight unseen, and assuming I might have missed some information somewhere) are:

1.5) Kingdom stats (maybe) also Pay to Have, in similar fashion to Guild Wars stats, if pets and other things are necessary at any point to upgrade kingdoms fully. Remains to be seen.

But all in all, I think I am tentatively happy to have snotstone tasks back. I didn’t like their removal, so I see their re-admittance as a win.

We’ll see if the other shoe drops on me hard enough to make me change my tune soon enough, I guess

Keep in mind with the rewards, they are different than what we have seen on the beta, in all the refreshes of the rewards we have had, and there is a chance they will change before they are released as well.

Id say hold off about any and all complaints about the rewards until the actual campaign is released, and we can see what we actually get

) Please please please, do not include campaign bonus stats in GWs. there are so many troops already that have massive power creep from when they were introduced. if stats are going up more, please prioritize troop rebalance!

I think the prime example(there are more) if i was to give one is Thrall. These are my stats outside of any GWs or campaign bonuses. i am personally missing 2 magic points from kingdoms currently. That gives Thrall 47 +2(my kingdoms) + 6(campaign) + 11(GWs) = 66 gems destroyed. yes, that is THE ENTIRE BOARD. for a troop that can guarantee fill on a single three match with a purple banner.
is this intended??? 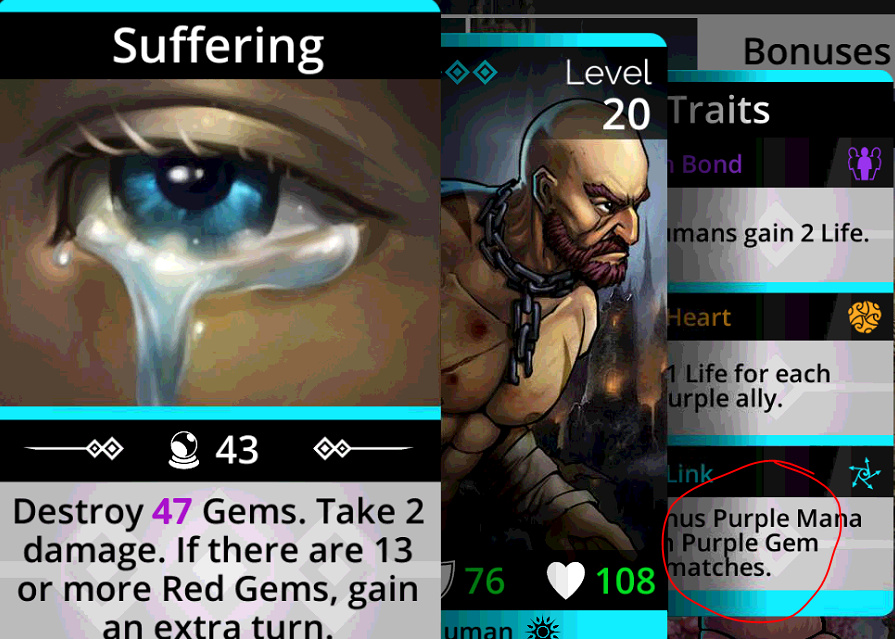 After your post, Thrall will be nerfed and campaign bonuses won’t be removed from GW.

if stats are going up more, please prioritize troop rebalance!

by, “more” i mean the campaign stats would be the more.

that is a fine outcome. and other troops need to be reviewed. i dont have the time to go through them all i just felt thrall was the most obviously game breaking.

EDIT: i do feel like it would be “easier” for the devs to remove the extra stats from GWs rather than reviewing a bunch of troops and deciding on rebalance.

I understand that from GW standpoint you want to nerf troop which used more in defense but not in offense. I myself want to nerf doomed books for that exact reason.
But Thrall is a very good troop in events, I will be upset if he will be nerfed and many others too.

nothing def vs offense here, that hasnt crossed my mind, certainly not my intention to make GWs easier. only trying to point out game breaking level of stats. Thrall can certainly be used on attack too.

Uh, let’s talk lemonade for a sec. Is there any way to avoid getting the Free Pass and still keep playing?

For what reason would you not want the free pass? It’s going to be the new default — no way to play the game without updating, that I’m aware of.

For what reason would you not want the free pass?

Well, after some number crunching it boils down to two reasons:

It’s my hope, though, that if you’re the type of person to ignore the new stars (and not rush getting the stats), then most people you’ll be fighting will actually get more than you, which should help F2P endgamers on the PVP economy.

Still sucks for Pass Buyers, though. Like buying a sundae’s toppings only to find out the little brown flecks were mites, not sprinkles.

Well, after some number crunching it boils down to two reasons:

Then, it sounds like you want to ignore Campaigns entirely and play like you do now in 4.9.5?

Just pretend that Campaigns don’t exist. Campaigns are their own self-contained mode, so they can be technically ignored without negatively impacting anything in the game, AFAIK. It would be the same as the game is now.

I hear a death knell lol.

I disagree here, because you can just ignore treasure hunt and anything else you wouldn’t have otherwise done, to avoid min-ing when you want to be max-ing resource gains over time. If you don’t change the way you play at all, this will still yield some gains, however small — a net positive.

Let’s look at that a little more in detail. The total rewards you get from the Free Pass are these:

The glory/gem/event keys would probably be okay, except that the tasks require you to spend more of those than you gain, likely at times you don’t want to spend them. I’m not really seeing anything else remotely worthwhile, except possibly the 490 glory. And maybe the 680 shards that can be turned into 6.8 diamonds, for a very lose definition of “remotely worthwile”.

To get all those fantastic riches you have to spend hours jumping through 160 hoops, when you could just spend 5 minutes on a farm delve run for the same loot. This desperately needs a carrot to warrant spending so much time and resources, especially with the extra stats also significantly reducing PvP gold payout.

To get them in total, sure.

My point is that if you don’t because they’re worthless then your hours will be spent doing what you want and you’ll still come out ahead because you’ll have some free things, even if you miss out on some, too.

Unless I’m misunderstanding how these tasks are completed. I don’t think they’re like the Adventure Board, where you have to actually fight specified battles in its own game mode for resources you (usually) don’t want. I think they’re more like the old Weekly Tasks, where earning snotstones was passive and didn’t really affect gameplay for anyone who didn’t care to do them.

As for PVP gold nerf: see my comments above. It will be bad for those who buy the best passes (probably), and that sucks. But because it is going to hurt their gold economy by increasing their team score, it might help those who don’t buy passes face higher teamscores and — thus — earn more than they currently do, not less.