I didn’t mean it that way m on Xbox myself. That’s why I did ask if snotstone event is available with the new adventure. And it will be

I think Salty or another dev mentioned upgrading it above +6 would also count. This was during the preview stream a week or two ago.

Yeah that was 4.3.5 and I think only the first or maybe second time it ever happened.

Not sure how game licensing and patch works but all I know that most devs have the same experience with Xbox that it takes longer to process than other platforms. Patch won’t go live without being processed ,checked and validated By the platform.
I could be wrong… someone with more knowledge can correct me if m wrong

Have you tried upgrading doom weapons? From what i see “temper” is exclusive to doom weapons

I bet the Gem’s devs scheduled it for Tuesday thinking it would come out early on Monday like last time to match every other company. Nope.

That would be a hard task for a sub 150 level player.

I bet the Gem’s devs scheduled it for Tuesday thinking it would come out early on Monday like last time to match every other company. Nope.

Or a day early. I think you might be right and the whole Australia day ahead confused them again. Salty is always getting confused shifting time zones.

Please show a screen shot of the actual “task”

Take your time for xbox, im not in a hurry to loose daily tasks

Trust me @Rickygervais the new adventure board rewards as a whole are much better then daily tasks.

@Notorious2401 unfortunately it looks like you have misinterpreted what Kafka said. She said that we were trying to release a small fix before 4.4, but that it might go out after the update releases.

@vorlon this seems quite odd, sorry for the inconvenience. Please contact our support here: https://gemsofwar.zendesk.com/hc/en-us so we can help you further. 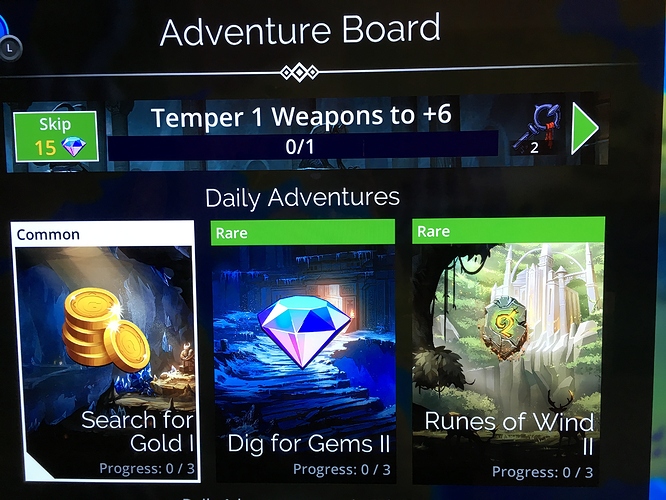 Its a step backwards for creativity, but the payout can be okay.

I will exchange anytime with you,