Okie dokie. I uploaded some pictures to the first post to show an example just in case.

No, that was on mobile. I hadn’t realised the fix was for unity only. Thanks

Biggest disrepencies seem to be in guild wars, and especially buffed cards…
(top is PC, bottom is Mobile) 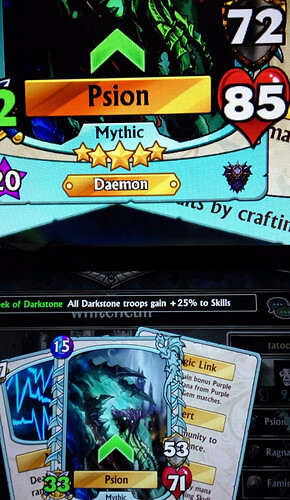 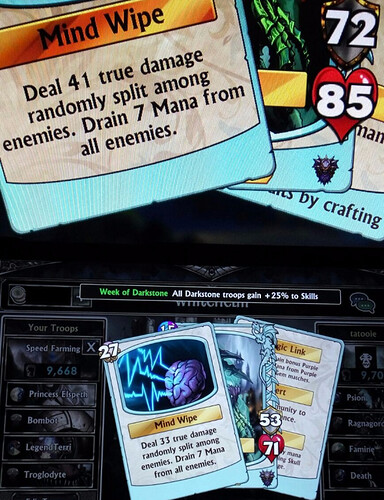 None event buffed cards (still guild wars) seem to have a consistent stat increase, aka +6 Magic, +6 Attack, +14 Armor and +10 Life. 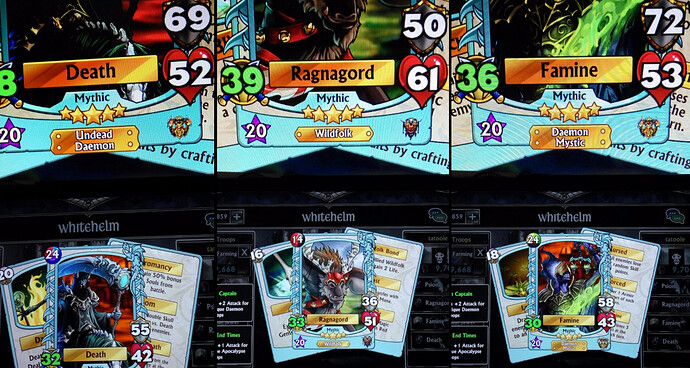 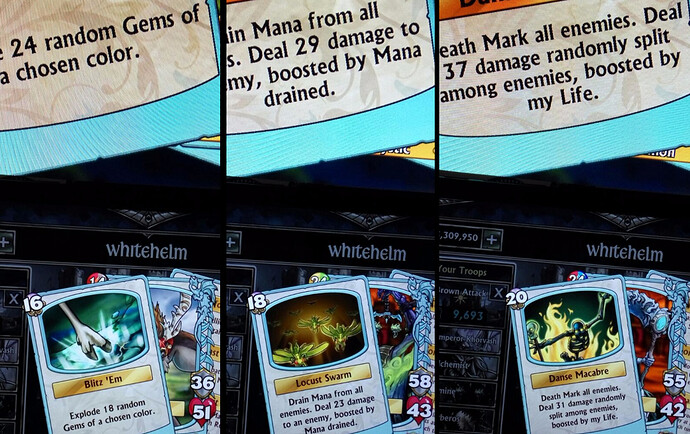 Opponent is Tatooie from Anonymous (hope that’s ok to post here?).
So if someone from Anonymous could check what sentinel bonuses he has, and post that here, maybe that helps the devs pinpoint the issue?

@sirrian @nimhain Could it be that you are rounding off/up in between results in the new calculation, which then ends up impacting the end score?

Opponent is Tatooie from Anonymous (hope that’s ok to post here?).
So if someone from Anonymous could check what sentinel bonuses she has, and post that here, maybe that helps the devs pinpoint the issue?

No problem at all for posting here.
Some of our guildies who play only on PC and who used to be very good in GW now have regularly poor results, even they hae spent several hours on their GW battles of the day. They feel ashamed of their results and stressed, playing has become a chore for them, and several of them are considering quitting the guild, which worries me much.
This is a very important issue and it needs to be fixed as fast as possible.

Can you ask to your guildies if they can also screenshot Tatooie’s troops’ stats (with Magic)?

And I remind this topic where I found some inconsistencies in the Event bonus (devs never reply…).

Done… I added them to the same post.
Consistent +6 magic to all non-event buffed troops.

Not sure if this one is known or not: but the game doesn’t run properly anymore if you pin it to the taskbar in windows 10.

It starts to run, then closes itself, shows a steam dialog, and start to run again.
Sometimes the process results in a “gems of war has crashed” error, on the first gems of war that started to run, while the second one keeps loading and plays fine (so you have 2 gems of war windows up then, one working and one with an error popup on top of it.

Running the game from the desktop shortcut works fine.

But you have to look into pinning to the taskbar, and running from there. Because it shows weird behaviour.

i only have to read only your first sentence and give you absolut right this game is broken like h.
the stats are random the ai has to many turns … 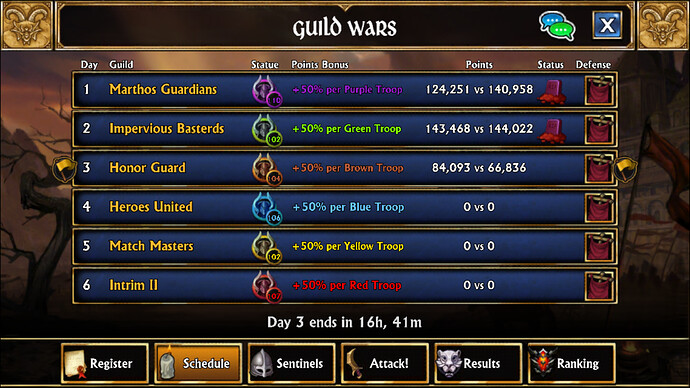 So the phantom troop error cost our guild a win. Had we gotten those 800 points it would have been enough to win the day. Maybe instead of worrying about the gem spawning mechanics they could focus on fixing something as simple as winning a match but still getting a LOSS. Oh those 50 guild seals lol…Sigh…

Both issues are bad. You can’t truly win any fight with this fake RNG because it’s rigged. No win or loss is fair anymore.

And I agree this pvp glitch is a serious issue.

I mean give us some warning, but nerfing every spawning troop without saying anything. I say take away x4 speed but change the spawning back. PLEASE!

I know they are contracts, etc in ITunes but I wonder if everyone went back and disputed every charge from GoW and see if they notice.

Ugh, yes, silently rendering SO many troops practically useless was a bad move.

I love 4x speed tho. It’s the only thing that keeps me going these days. If not for that I would have been 100x times more frustrated with the game.

Would you rather have spawning back to normal, or x4 speed?

I would rather have both. Why choose? Those options aren’t conflicting. They can easily exist together.

Team Power does not calculate correctly in PvP/Casual.

[Not that the player level is necessarily relevant…except that when I see Level 800+ and Power of 5000+ I assume it is a lie.]

Team Power does not calculate correctly in PvP/Casual.

[Not that the player level is necessarily relevant…except that when I see Level 800+ and Power of 5000+ I assume it is a lie.]

Isn’t it because of the issue of the single troop defense team being replaced by a random defense team?
It seems that the update has not solved it.

That is likely, but if it’s a known bug, it should be on the list.