What is your favorite troop?

That’s a pretty Peng-long list. You added more to your comment, so I’ll add some more in response
I also like Queen Titania AND Krystenax, and they are both really good troops. I support your love for Gorgotha!

#1(Baseless-favoritism-with-no-relation-to-game-mechanics): Wildfang, every other gnoll, Senita and Agave… Ok, i’ll put Saguaro here too because he’s still a cactus-person/monster of sort, but his picture could be waaay better.

#1.1: Emperor Khorvash. I think he is very well designed from many perspectives, his mechanics being a great combinations of aspects seen in other troops well based on the lore of his kingdom. He is like an evolution of a Lion Prince with not only a better mount and stronger spell (True Damage instead of normal), but also combining the powers of the Manticore’s “Draining Song” to put it in a simple way. In the game these combinations also offer a very reliable well-rounded kit for one of the best front-line troops you can use. (I think many of the other troops supposed to take the lead didn’t received as much care if you check out all the rarities for such role.)

#2: Storyline Epics as follows:
2.1: Amira and Herald of Chaos, both had a change of heart and decides to follow the hero, Amira could be a little improved in her magic to be a little more usefull as a Blue killer, since her relase the bonus for Health just outpaced her and well, Herald of Chaos and many other troops still need some revision.
2.2: Raven and Lil’ Johnny Bronze, shenanigans all around, someone can’t really not love them.
2.3: Tau, his simplicity is really funny. I was honestly really amused with the “Food Riders” joke.
2.4: Keghammer and Gemhammer, another really funny characters, i hope to see both again eventually.
2.5 Penglong: All dialogues with him were great, his wisdom is not very conventional which makes it very interesting. Also the hero taking a ride with him reminded me of Falcor from Neverending Story.

#4: Euryali, she is decent and have a decent summon. If only poison could be improved.

#5: Deep Borer, another troop well designed with a good mechanic around the theme of its spell. As it digs the board is filled with dirt (brown gems).

#6: Elven Bard, Emperina and Sunweaver, i like troops capable of buffing others, even if they are not so great as of now.

Thank you for expanding on my favorite troop’s awesomeness!

Also, I TOO found it hilarious and pretty clever for them to write in Tau calling the mounted opposition Food Riders. Thank you for the great response, I love seeing what different players dedicate their time and awareness to when playing this game.

… Remember when I spoke about Mab every other day? Me too. 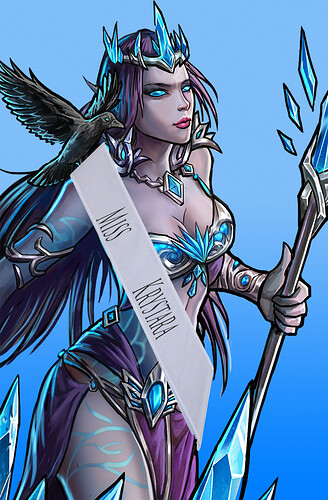 ALSO: Thank you for more of a view of her artwork.

[image] Introducing Princess Mab. Queen Mab is one of my favorite troops!

Divinia is definitely up there for me, because I’m obsessed with exploders, same with Infernus.

I do love Khorvash, he was my first Legendary Troop (how lucky!). But I felt like I wasn’t cool if I said that because everyone likes Khorvash, heh.

I had to craft Khorvash, but I was lucky with Queen Mab. I had Snow Guardian, Justice, Valkyrie, and Justice, so I was already preparing to make a Queen Mab team, but I couldn’t get her. Well, luckily, I think the first non-GW weekly event was rolling snow troops, and I got her with my LAST event key on the LAST day of the event. I’ve been using her ever since, and Khorvash the moment he became available in the Soul Forge!

What in particular draws you to Titania, @Jainus?

Wondering the same, especially with the “now” part.

QT: well it’s the whole package - looks, power level (high end but not stupid or broken), fit with my favourite style of teams, the folk lore…

I love exploders too. What make Divinia the best for me is that she can start with half mana, can’t be drained so if a Famine goes off she can just cast again to help refill the team and heal what Famine hit and give a good amount of life to not only survive an Ubastet cast but she can give everyone enough life that a second cast still does nothing.

And this is why I was looking forward to people’s favorite troops, because I didn’t think of using Divinia for something like that. I’ll have to look into her some more!

[image] Prince Khorvash and Lil’ Lhino! You don’t get to become Emperor by lounging around - It’s training time!

I love Naga Queen. Even when some of my other old favs have gone out of flavor (Jarl Firemantle, Draak, etc.) she still comes in handy more than I expect. Every time I get around to using her in a team, I win 90% of the time. She is the bomb-diggity.

#1: (obviously based on style and background alone and not on game mechanics or power) Jarl Firemantle forever.
Easily the best flavor text in the game in how it references a quote from a great movie that also describes Jarl himself and his character perfectly. His spell used to look like a Firestorm raging over the board (not so much anymore with changes to double spawns) accompanied by his maniacal laughter made it just the perfect display of a raging Fire-giant wanting to see everything burn.

#2: Hyndla Frostcrown (secret number one, don’t tell Jarl!).
The only female giant in the game for some reason, great art, stylistically the perfect counterpart to Jarl bringing balance to Stormheim while infusing Frost-giants with some much needed personality.
Mechanically she is basically the single thing that keeps giants somewhat competitive (if you want to call it that) by making giants underwhelming damage spells relevant with her unique trait.

#3: Ubastet and Rakshanin.
They are tigers, tigers are the best, that is all.

But for serious, my top four favorite troops that I enjoy playing with are probably:
Bonnie Rose
Orion
Marilith
Sylvanimora
Not the most powerful, sure, but I find them fun.

If I make a team and don’t include Infernus I must have a specific temp goal in mind.

Magnus - I really like the artwork;
Great Maw - anything that references Dune…