and it has been pinned!

Night Terrors mana color has been changed from Red/ Purple to Red/ Brown.

6 new troops has been added to the list. Arcane Blade stones can now also be farmed in ‘Leonis Empire’, as well as ‘Sword’s Edge’.

This is a great resource; thank you for putting it together.

Glad to hear that you found it helpful!

The list has now been updated. Let me know if I missed anything.

The six Guardians has now been added to the list.

Troops from Dragon’s Claw has been added.
Bear in mind that we now also can farm Arcane Storm in
Dragon’s Claw, as well as Adana.

Since Imps is not from any Power Level Kingdoms they have now been added to their own little list. It can be found near the bottom of the list.

Mythics list has been reworked a little also, the list has now two minor under groups, ‘Apocalypse’ and ‘Other Mythics’.

I suppose that this is as good of a time as any to say that I appreciate the effort you’ve put into this list. I have frequented this page since I started playing Gems of War on PC, five or six months back. Even after the addition of Explore showing the Arcanes for each kingdom, this just makes everything more convenient and is always au courant.

Glad to hear, thank you!

The list has now been updated with some ‘ARRRR’ troops and the very first Merfolk, Sharkey - he’s such a good boy!

The thing I wanted to say is that you now can try your luck with farming the Arcane Shield(Blue/Brown) in Blackhawk, as well as in Broken Spire.

Cheers for the effort

Small icons of the differently mana colors has now been added to the list.
It will then be a little easier for people to find the troops by arcanes they are after when
they are in a hurry. Also it looks slightly better. I have decided to not use the arcane stone
icons in this list, because the mana icons is showing the colors in a better and simpler way.

I have decided to keep the colors written for each stone type as well, due players that
is dealing with differently grades of color blindness(include myself), might find it helpful.

Credit to @Lyya that posted all the arcanes on the boards earlier today.

@Lyya I have tried to find a code that let me add the Arcane stone pictures at the right side of the text, but had no luck so far. Is it possible to do it, and if so, what code is needed? 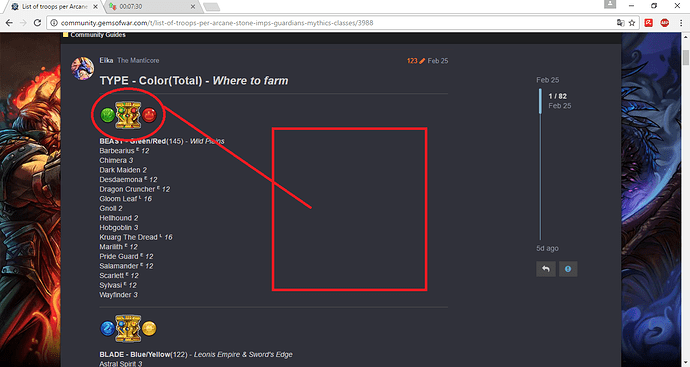 I don’t have images of the Arcane Traitstones anywhere on my site. I can add them for you if you need them.