This will make everyone’s life easier, please make the dev see it 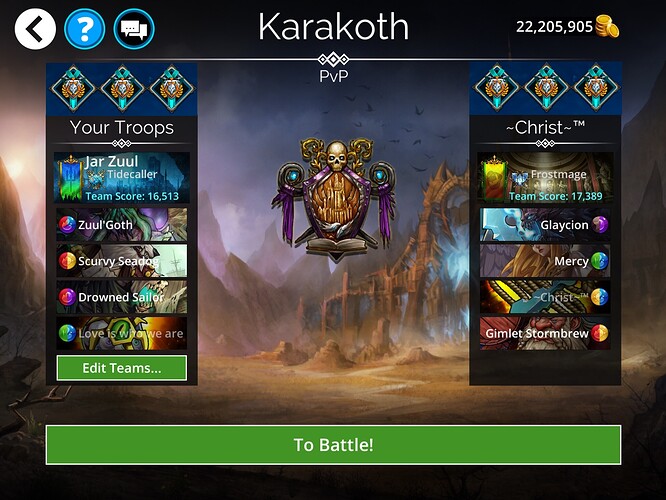 We investigated several ideas of players being able to switch between medal loadouts, that included both the team setup or pre-battle menus, however we were left unhappy with how this turned out, as it made those 2 screens too confusing and complicated (especially for newer players).

it made those 2 screens too confusing and complicated (especially for newer players).

I like OPs proposal. Considering how long medals have been out without any improvements, I doubt there will be any changes though.

We investigated several ideas of players being able to switch between medal loadouts, that included both the team setup or pre-battle menus, however we were left unhappy with how this turned out, as it made those 2 screens too confusing and complicated (especially for newer players).

That’s just about allowing players to switch between the three loadout slots from other places as well, e.g. from the “To Battle!” screen, without having to go back to the global screen. What @YourMom is proposing is to allow three individual medals to be assigned directly to each team, similar to how we currently assign four troops.

Btw , took me a while to figure out the double denial to Christ pvp team. LoL

That’s just their way of saying that they couldn’t charge money for it so they won’t spend that much time trying to do it.

I find myself wondering if part of why Medals aren’t permanently attached to teams is because it is possible to use all of them up and then for the game to be looking for Medals that no longer exist in the Player’s inventory.

To me, it’s a different thing from permanently attaching a Hero Class to a team. Because you can’t lose Hero XP; the biggest issue there is if you want different Talent settings to use in different team configurations. On the other hand, it might create coding issues if you set a specific trio of Medals to a team and then they weren’t around when it came time to fight.

It may be a silly issue, it may even be a non-existent issue from a coding perspective. But it might be a problem and might create issues that otherwise wouldn’t exist. And if that’s the case, I could see why the developers and programmers don’t go that way even if it’s not viewed as a very good reason by this community.

Even if we can’t set medals for each team but will only have global it would still be way easier to see them like that and to be able to change them from there.

While we’re at it, why can’t we have 4 or 5 slots for medal sets? It’s a bother to have to change medals all the time because one set is reserved for world event medals.