[Reported] I've got this from guild chests, it's a bug, right? 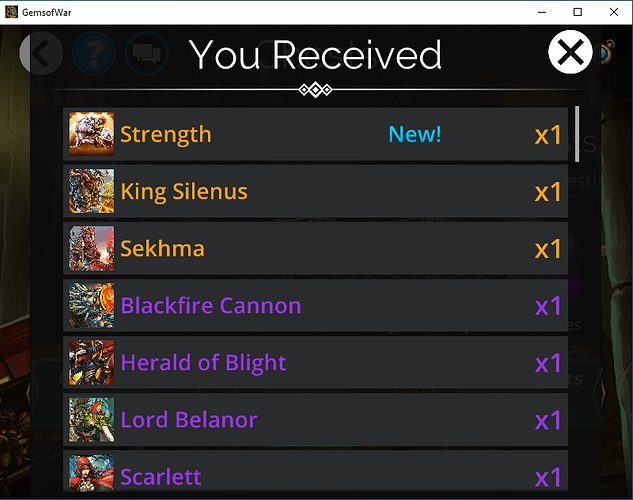 Confirmed in Glory Chests as promoted.

Are we going to lose that?

…and of course inform all players through other channels about this generous feature.

Confirmed in Glory Chests as promoted.

The “promoted” part really cracks me up. I think I know what happened there, it’s just crazy hilarious.

Thank you for brining this to our attention. Strength shouldn’t be available in chests, I have reported this to the development team to get fixed.

Well, too late to pretend, that the thread never existed.

I guess, the next steps of action will be, that the people behind the game do delete all Strength troops (including those earned through campaign) and refund each affected player 50 gems.

I guess, the next steps of action will be, that the people behind the game do delete all Strength troops (including those earned through campaign) and refund each affected player 50 gems.

Hell-to-the-no, I hope that’s not something that will take effect because in this case gems can’t cover my dollars. (If I read your comment right)

Leave the mix up as is devs, and just consider those who got them by accident fortunate, move along as nothing happened.

I’m saying ya got tons of offers to compensate for.

Hell-to-the-no, I hope that’s not something that will take effect because in this case gems can’t cover my dollars.

You might be surprised how aggressively IP2 competes for the Worst Gaming Company award each year. Not too long ago they had the bright idea to take away a mythic troop gained from chests from all accounts and compensate with two VIP keys, saying they actually consider it generous because it gives players two chances to earn back a replacement. I imagine EA only keeps winning because more players play their games.

Did it actually give players 2 chances? They should’ve left it alone, come on, I don’t think it breaks the game…

The easiest way to fix this is: ignore it, but fix the ROOT cause. In another week and a half, it will be the 4 week threshold for availability anyways.

So I was opening chests yesterday and got one. I had no idea it wasn’t supposed to be there until seeing this post today and I used an orb to ascend to mythic and fully traited it, so if it is taken away I better not just get gems. I better get my orb and traiting stones back at the absolute minimum

Remember, they can’t refund people keys and other resources they spent when a mythic isn’t in the chests.

So they should best leave this alone or else need to figure out to give people who opened chests to get Strength back their resources of they want to take the card away again. Same would go for trh gold spent.

And no, a few gems, vip keys, or a different legendary won’t do.

The simple question is how would this cause serious problems if they didn’t do anything about it?

And if the answer is “it wouldn’t”, then they should just leave it in the Glory Chests and leave it the hell alone!