On PC (Checked my Mobile- the information is correct there)

Review the information
Incorrect cost for next Power level 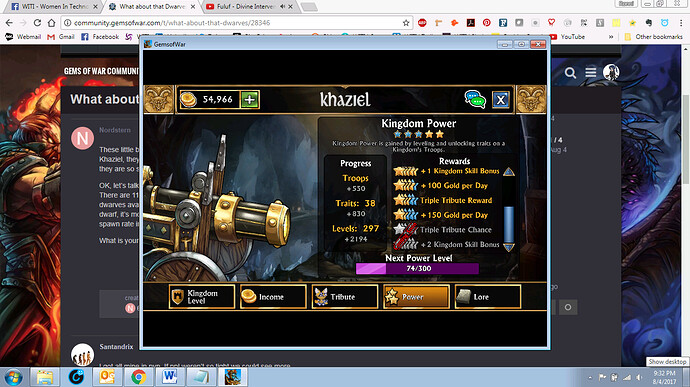 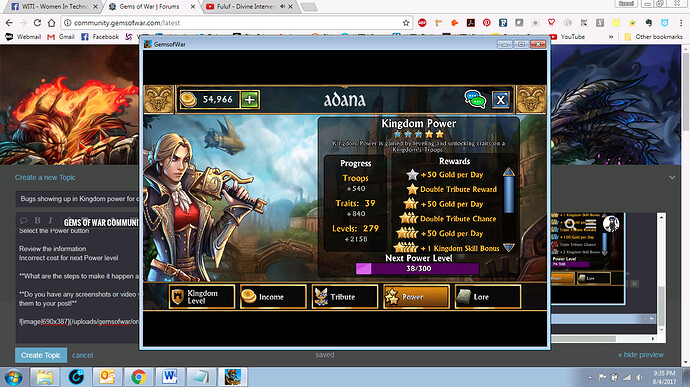 I think this was discussed already. The new Unity build shows only the difference between power levels, not the total from 0. And for Adana it looks like the numbers themselves are correct. My quick mental math got 3558 points for you, and 8/9 stars are 3500/3800 points respectively. That puts you at 58/300 under the new reporting system.

I don’t think so. I went looking around and could not find anything about Kingdoms showing only /300 point top

Even my lower kingdoms have this. And it does not map to the Mobile linked account.

Anyway I will keep searching but I think that is incorrect that this is new method.

Also I looked through the three main 3.05 threads

EDIT: Please do not post feedback regarding the UI or changes in this thread. Let’s keep it to bugs. The lovely @Taisiakat has a thread for feedback and suggestions regarding 3.0.5 here. Hey everyone, As the 3.0.5 patch has been released we’ve started a shiny and new thread. Please post any issues you see here and we will keep this list updated with our current progress. As we have moved to Unity there are new minimum system requirements to play Gems of War. They can be found here. Also make…

Unity Changes (3.05 P.C / 3.1 rest of the systems) Changes that need to be rethought Gameplay Chat (PC/Mobile)

There is no mention of this being a feature or a bug.

There is actually a post on it in the Known Issues thread, not by Devs, but by players.

Also to compare the two here are my Zae’jin shots for PC and Mobile:
PC: 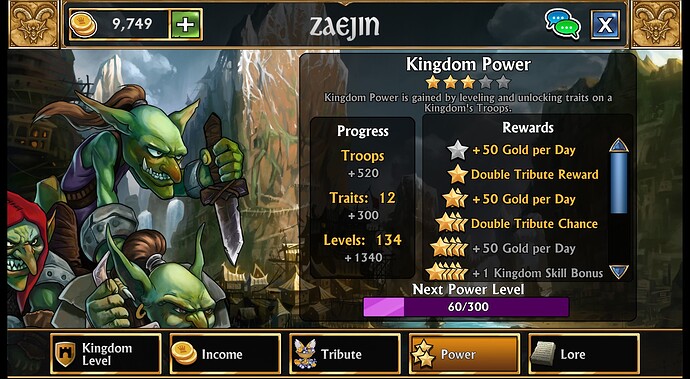 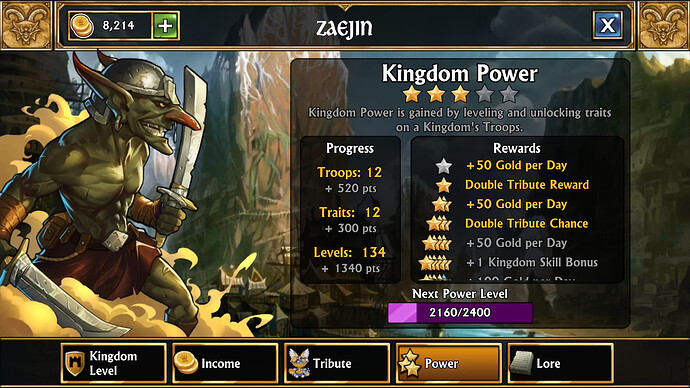 Maybe reason @Saltypatra didn’t add it is because like me she didn’t does see it.

I did the math and for those kingdoms still with 3 - 5 stars the math doesn’t add up on the PC. Hence if you could find the exact post so we can get @Salty to decide which direction - to go on my tracking list for things to change back, or for her’s as a bug

Based on the match - I think it’s a bug. And I can’t see why Unity would have this issue given that the math is pretty fixed and displaying large numbers isn’t an issue (like I have over 100k souls)

Sorry, I had it linked in my post, but it decided to make it a hyper link and not a preview post. Fixed now.

I did the math and for those kingdoms still with 3 - 5 stars the math doesn’t add up on the PC.

I’d be interested to see the math on this case, since as you can see above the math for my kingdoms does add up. Also if the numbers are different for different people, then it’s a case of a calculation error. It would show as incorrect on both PC and Mobile.