So something that has annoyed me for quite a while is concerning Courage. Bone Dragon is in the team but (for a change) he isn’t what I’m griping about. 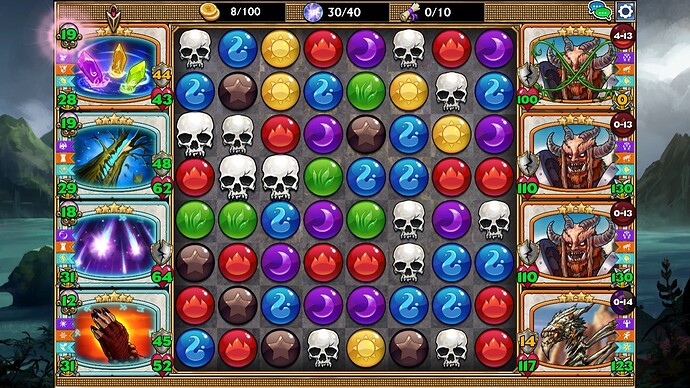 This screen shot was after BD fired once ! I have used the different combos with Courage and BD and I have never had stats boosted the way the AI does using the same team. Never has my attack been over 100 much less boosted to 130!

Just wondering if anyone else has noticed this difference in the boost calculation?

Here’s something to know about how Courage’s third trait works: There is a test in place that checks how many skull matches can hit the front troop before it dies, and the trait only activates that number of times (it can show more trait animations, but no more actual stat boosts).

Barriers and Agile procs extend the life of the enemy further, so more skull matches can be counted accordingly. Entangle (or simply zero attack) is the worst of all - it can make an obscene amount of skull matches count… Basically never take a Sylvanimora to a fight against BD+courage, is all I can say (though you do still have a decent winning chance in that screenshot).

This is why I refuse to fight any match with courage and bone dragon. Courage’s 3rd trait firing multiple times per round, compounded by multiple courage, giving 40 or more life and attack to all troops in addition to massive skull damage is far beyond broken.

Edit: I mean until they review the guardians, mirroring the enemy deck usually work as counter, including BD - Courage. I personally also think that Courage and Justice need to be toned down a bit. And yonizaf explanation was on point too. Though devs said they will review guardians after they nerf Bone Dragon first, God knows when.

While we may touch on Courage later, we are unsure if he is just a symptom of the Bone Dragon problem. Once the Bone Dragon change is released with 3.0 Patch, we will be reviewing the guardians.

Thank you for the replies. Your answers don’t take away the frustration of when this happens but it does help me understand why it happens. Excellent information.

And I did win the match. Their boost did not save them.

Wow, thanks for shedding some light on that. Explains why I see such high numbers, since I always use Sylv against BD. Sylv + Krystenax to provide meat shields works pretty well in spite of things, though. 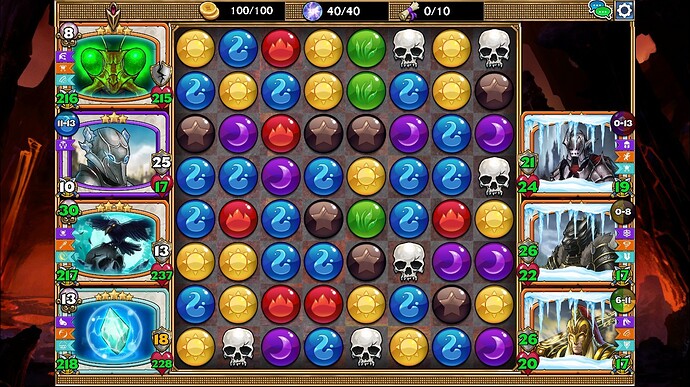 I love this team…

I still think Sylvanimora is worth it in order to not have the first troop or two get annihilated. Its also an excellent thing to have against the Wraith variants to stop Deathmark …

I have used that team @Jon31397. Thank you. Slightly different order - pop Valk in 2nd and bump Justice and Mab down one - but it is a very strong team. I find it too slow for me but it certainly gets the job done.

Problem Solved in 59 seconds. (In case anyone notices, my very first move was a 4 yellow match, which explains why Valk has mana before the red match where the video starts).