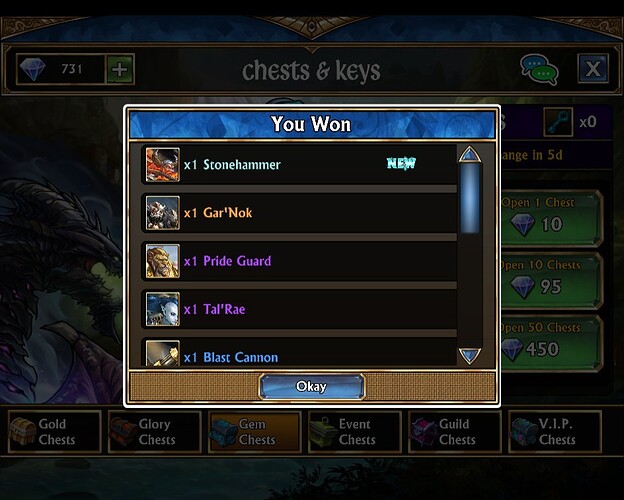 Are the 15 red/brown gems a fixed value?

Edit: That type of information should be shown in game instead of relying on people to explore game files.

Yeah it is. Its only the life gain in his spell that is scaling with magic.

Thanks, just seen it here too:

Here’s a compilation of all changes I can see today. I will add the full detail of changed troops to this post, except for Urskaya troops which will get their own post later. ##Latest spoiler changes Stonehammer now stuns/burns all enemies, and creates 15 red and brown gems. His cost was raised to 24. Tesla now deals true damage, her base damage is increased from 4 to 8, and her last trait gives 5 (was 4) attack and armor to mechs, Garuda has its last trait changed to " Allied Stryx gain 5…

Stonehammer - Troops - Gems of War Database has this information as well. But I agree, the game should do a much better job explaining what part of a troop’s spell scales with Magic, and at what ratio.

Considering the effort into writing the story, shouldn’t Stonehammer at least get the Impervious trait?
That’ll free one of the three traits up into something else that fits more into his theme, like Dwarf Bond or Pyromania?

I know @Sirrian said he’ll be making less visits to the forum, but come on! At least stand up for your own story!

If it did, it would be a bit to much

i know but that means if you want more “complete” defense trait setup it doesnt necesarely need to include impervious, it may be a set of other traits that include drain-immunity… and instakill immunity…

So, impressions after using him for a few days:

it’s really weird that his unique Mythic trait is, for all practical purposes, the same as Gorgotha’s Legendary trait

Agreed.
Would it be so game-breaking to just have him at 100% immune to skull? At least I think that would make his meta much more interesting. I mean, if I look up the definition for “Unbreakable,” it means: adj. impossible to break

Frankly, 80% is a far shot from “impossible”

And it shouldn’t, it’s already powerful enough. However Mana Shield should (could) protect from Mana Drain.

someone getting a really nice piece of artwork, seeing the flaming hammer

Though the hammer is clearly bent which looks a bit of a shoddy job. Wouldn’t want him crafting my Armour, no guarantee it’d fit too comfortably…

game-breaking to just have him at 100% immune to skull

Yes if it didn’t have a downside. I’ve posted a generic trait suggestion before: Ethereal trait: immune to skull damage, take double (or 50% extra) damage from spells.

It’s kinda stupid that the hammers handle is bent.

You kill it with abilites anyway, and not with skulls. He shouldnt take damage from skulls. Right now his mythic trait is gorgotha wannabe.

Did that place have eight peaks by any chance?

I agree that his trait is ridiculous - but necessary if you want to use him. It takes so much arcane traitstones to be…5% better than a legendary…hmm. That just doesn’t sound right!

It should be completely immune. That’s mythical. And worth the trait stone cost. Either that or leave his third trait alone but give him impervious and another trait that would help him. As it is his traits just feel wrong compared to other mythics (and gorgotha)

And you also have to consider that he is a tricolor and needs to be in the front spot. So he should be worth it.

I like stonehammer and have replaced gorgotha with it on one of my teams. But it still bugs me that his third trait is a gorgotha wannabe. Just like it bugs me that dragon soul is a copy of immortal king… give it something unique!! I’m still waiting…

Did that place have eight peaks by any chance?

I’m sure that a lawyer for the devs will be very enthusiastic about telling you how there are absolutely not eight peaks.

Although I suppose that it wouldn’t be the first time that they’ve poked the infamously litigious bear (cough cough Slayer cough). ;p

100% skull damage reduction is just unfair for skull based team: what happens if you are in front of Stonehammer? Not everyone can scout for free and so on, a team who can be unable to win against another team sounds weird.
If you want to increase his “tankiness” compared to Gorgotha change his trait for reduction to all damage (like it was already proposed many times).

I can see that point, so perhaps it shouldn’t be 100%. But it should be higher than 80%. So perhaps more like 90%. I am iffy on this because I still would rather see immunity because if you don’t have free scouting you should still be scouting if you don’t want to take a team that is heavily countered. Retreating doesn’t lose you anything really, so if you have to retreat because you ran into a hard counter then that’s on you.

Hard counters aren’t a bad thing if you don’t have too many hard counters to a specific type (looking at you mana burns that are hard countered by impervious AND mana shield and now both of those are on really good troops that I see everywhere! Which is why I don’t use Mab unless I use her just for utility on the team. Which, by the way, you can easily have a Queen Mab team that can’t win against another team so apparently it isn’t that weird for devs).

I don’t believe that any troop should have damage reduction to both spells and skulls because that would be really annoying to face. When it’s one or the other you have a counter rather than it being good at everything. It definitely needs skull reduction because it is a front line tank but I don’t think adding spell reduction is a good choice.