4.2 files flagged as Trojen by MacAfee 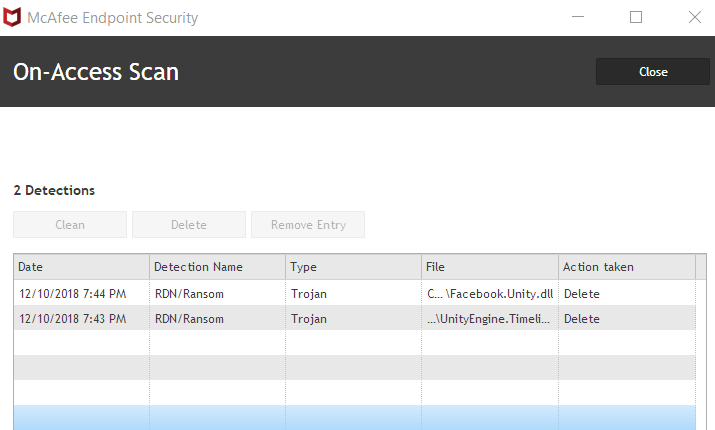 What you were expecting to happen, and what actually happened:
expecting game to download without flagging as a virus

How often does this happen? When did it begin happening?
every time i launch the game from steam, MacAfee pops up and deletes one or both of these files. if the game launches before the deletion or quarantined then it appears to run fine. it does seem to run generally slower than before, but that could be something else

Do you have Gems of War added as an app to the firewall permissions list?

As i suspected in another thread the new files and interactivity that makes notifications possible on our web browsers can be detected as virus or malicious add-ons by many different softwares.

You’ll need to do as Cyrup suggested.

Also @Cyrup , if it’s not already in the FAQ i think this might be handy for Windows 10 users:

Since I was having issues with my notifications not working while on PC, and then when I got off they started working again, I went hunting. I have found the issue on Win 10 I was having. For anyone else having the same issue, notifications not showing up while in game/any game I had When I’m playing a game set to On. Which meant that all browser notifications while in any game, would not appear. To find the setting, just search for Focus Assist [ApplicationFrameHost_2018-12-12_12-59-59] […

I said this more harshly the other day and will say it gentler:

Strongly consider using any other AV but McAfee.

First, they work on an extortion model. This AV is famous for routinely finding false positives. What they’re hoping for is enough GoW users complain that GoW devs contact McAfee. Then, for a few hundred dollars, McAfee will offer to “re-evaluate”. Other AVs don’t charge for this, just McAfee. Other AVs don’t false-positive as frequently, either.

I also want to point out that over 15 years of running Windows, the only time I’ve actually had a virus infect my system was on a machine that had McAfee because work mandated it. Windows Defender has been enough for every other machine.

As if that wasn’t enough, it was created by a murderer. At one point, Computer Associates had the sense to distance the product from him. Now I guess they reckon this character is worth the brand name.

I really hate this one particular AV because it’s caused me more trouble than any individual malware.

this is only 1 of a few PCs/Phones i play GoW on. I cannot change these settings as it is corporate controlled settings

just thought i would bring this to your attention at least. for now it does not seem to be preventing me from playing GoW on the PC. but i would guess the browser notifications would not work, and i am ok with that.

In addition to “not McAfee”, I’d also recommend “not Symantec”.

On the positive side, I’ve had good experiences with NOD32 and Bitdefender.

Just an update on this - this wasn’t caused by the notifications but rather McAfee flagging Unity files as viruses (which isn’t the case obviously or half the games you play would be infecting your computer).

I think your 2 least potentially breaky options are:

One of those unity files (unity.dll) isn’t required to play the game on steam - the other is though so deleting one won’t solve the issue and I don’t generally recommend deleting game files - but as you’re tech savvy I thought you’d be interested in that information

I’m sorry that we can’t solve this directly for you. Let us know what you decide to do and the outcome please!