@Kafka passed this on before the weekend and since this morning we have been attempting to reproduce this issue while we have been investigating. Once there is an update or anything further, one of us will jump in here again

but just wanted to let everyone know we are looking into it.

Thx @Jeto . Just too be clear, as compensation, we are expecting the missing BS, nothing else.

@Kafka passed this on before the weekend and since this morning we have been attempting to reproduce this issue while we have been investigating. Once there is an update or anything further, one of us will jump in here again

but just wanted to let everyone know we are looking into it.

So, does this mean @Kafka could’ve actually told us directly and fair with transparency that at the time of “passing this on” (before dinner ^^) noone of “the team” was reachable anymore + noone would care for the whole weekend and the players would be left alone for that timeframe?

Just making sure I understood that correct?

edit:
I guess it does, since we now got the “[INVESTIGATING]” in the thread name…

What do you mean you’re trying to reproduce the issue? You just do the daily battlecrashers and there’s 9 instead of 10. How is that hard to reproduce? It’s been that way for 3 days now. All you have to do is play the game and it’s apparent.

How is that hard to reproduce?

It would require actually playing the game.

we have been attempting to reproduce this issue

No need. @Kafka is “top 10 most active player in the game”. For sure she knows.

So reset is upon us once again in a few minutes and the last note was they’re trying to reproduce something that affected literally every single player (not a single report of a 10th crown through the whole weekend). Maybe we all just had a bad luck weekend after all.

I’m all for shouting at this bug but I believe there is only Jeto in today and kafka was not in work over the weekend.

Trying to reproduce may of been a poor choice of phrasing as the test servers are on advanced time, not previous time and I suspect that now that the vault event isn’t running that 10 crowns can be achieved from reset today. The devs need to time travel back to the weekend to reproduce the bug @Jeto

If there’s noone around during the whole weekend to look after a posted issue that was basically confirmed to happen to a number of users then just goddamn say so in the first place. Then “the players” affected know what to expect and at least until when they can’t expect anything to be done about it. Still better than empty promises ala “the team will fix it” - that could also be interpreted as lazyness (BEST CASE) or just as desinterest, neglect or even plain lies (WORST CASE).
Also “the team” should find some way to make sure such fails can be worked on during weekends. What would’ve happened if it had been some form of payment issue? Or if the whole server would’ve not let anyone log in during the weekend? Yeah, that’s “more pressing/severe” cases but still noone would have been ready or “reachable”.
Or would “the team” have ran out of the caves all of a sudden because of “da M0N3YYYYYY”?
The question remains and should be adressed internally about the completely unprofessional handling of the situation overall. Someone with decency, please step up. Seriously anyone must be able to grasp that some things went very wrong here - mainly by how the situation was handled.

Seriously as if I would’ve posted that topic about a shit of a crown because my goal was to “cheat the system” in some way? As if I would be able to even succeed and get through with that without making a fool out of myself? Plenty of other players in this forum with knowledge and expertise that would chime in and call me out if I was wrong, lying, etc. So what the henker are your thoughts in the first place as a dev if such a bug report comes up? I just don’t understand it. “not our fault”, “fault of the players”, “no bug at all”, “maybe it fixes itself”, “maybe someone else will fix it, even though noone is there to do anything”. etc

This is such complete madness and I feel so sad about it all, because I enjoy the game, but everything around it if something goes wrong is just so awkward and unprofessional.

i guess there’ll be at least a hundred or so people tied on top 19.

In addition, just on the day after this “The Crown Affair” and its terrible handling, the Legends Reborn is revealed in all details. And oh wonder, it is about money for books of deeds, money for forge scrolls and also a bit about money for cursed runes, the three most rare resources in the current state of the game. I wouldn´t have liked the conditions of the rewards of Legends Reborn anyway. But right after that weekend, where the crown issue during vault events happened in the exact same way as seven months ago during Nexus release, it tastes even worse

Hmm, the Vault weekend is over and if no one at your end actually tested this before the weekly reset…

Secondly even if no one at your end can “find” this error, bug or whatever you choose to call it, isn’t it fair to assume that with this many reports about not being able to get a 10th battlecrasher- that there is SOMETHING wrong?
Why would so many dedicated players report the same issue/problem/bug/error? 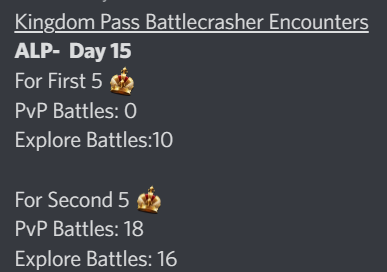 100%. It was the same with Nexus pass and Vault event. Same as campaign events will be bugged when a new kingdom is kingdom of the week multiple times in a campaign

Maybe we all just had a bad luck weekend after all.

We were clearly all just delusional all along

I started playing today about 20 minutes before the reset.

When the game started, it downloaded some new resources and I got the 10th Battle Crasher shortly afterwards (before the reset).

Thank you that you take the time to react on this topic, I appreciate it!
But tbh I had expected more,
No kind of sorry for the issue, what was for many players took the pleasure away in playing the game, hunting vault weekend away.
@Kafka had said on Friday if it was clear there was a problem with the spawns of the BC’s she would place a message here… It was very clear atm that the spawn coz the vault weekend was not okay and gave the same problem as in the release of the KD Nexus… but seemly it was for the dev’s side not clear that there was a bug in the BC spawn coz we stayed here in full silence from that side.
Many players missed the feedback and felt not be taken serious, ignored and create here an ambiance of repeat and unhappy players.
The still not pronounced bug The spawn of BC was this weekend not okay give me the feeling that the dev’s dont care what their customers/gamers feel over their product!
I find that disrespectful and a bad case to treat us or ignore us in this case!
Further, I think its made clear by others what we find of this…
I truly hope we get in a short time a more specific answer!

The vault event is over, how are you going to replicate it? This literally happened the last time there was a vault and kingdom event at the same time.