FWIW, I very much appreciate that you’re one of the few regulars not constantly complaining about GW.

Passive agressive much? Doesn’t suit you tbh.
So someone told you to shut up, big whooping deal, we have all been there, it is an online game forum after all.
You have a tendency to get riled up over small things, happens to the best of us, seems to happen to you a bit too often, get over it.
Your opinion on many issues is still very much appreciated here, so do something fun to cool off and come back.

The tone conveyed by your posts often reads to me as hostile, even when it seems clear there is no hostile intent. Event this post is hostile in tone, in addition to being confrontational in nature.

This forum tends to have a pretty broad variety of players that love the game, who even when offering strong criticisms of the game, do so without the seemingly implied hostility of your writings.

Sorry you feel that way @Vangor . I saw your comments in the other thread, and I don’t think they were that provocative, much adieu about nothing. However, I also don’t see them as really necessary, since they didn’t add much to the conversation. Echoing your comments from that thread, “What are you hoping to accomplish?”. Personally, I find those threads a little annoying, but that’s why I just don’t bother posting in them. And in fairness, if I were leaving I would probably make one myself since I feel I’ve made some connections here, and I would hope you’d do the same for the benefit of your friends. Just to show the other side of the coin…

As for what I hope the forums become, I try to make them that way by posting what I expect, and privately encouraging others to do the same. But as these are unmoderated public forums, I also expect a certain level of this junk, so I just try to ignore it and move on.

Hope this is only temporary… and GO KITTEN!

Thank you all for your responses😎

Of course your opinion is not welcome to the person you are arguing with. Rare is the example of someone who actually values an opposing viewpoint.

I would suggest, however, that before you post in a topic, you take a moment to decide if the post is contributing to the conversation in a productive fashion. It’s often helpful to try to place yourself in the shoes of the OP; sometimes it’s just passion (anger, excitement) speaking, and they need a moment to cool off.

In any case, attacking the person instead of the message (“He just wants attention”) will always result in confrontation. I don’t think it takes prognostic fortitude to see that coming. If you can’t stomach the inevitable “get out of my thread” response, then consider not posting it in the first place.

I’m fairly new to the forum, and so far I think we are in disagreement about 99% of the time, and yet…
I enjoy your posts.
The point of forums is to share opinions and trade point of views.

I think you suffer from the “snarkier than intended” syndrome that also plagues me too often.
It’s hard to strongly disagree “politely”.

I know I could be more diplomatic but I don’t care to be. I know if I did then it would mean fewer people trying to silence my opinion. But I don’t care.

I think you have two options: stop caring about the people trying to shout you down or start being less confrontational with your responses.

I think you have two options: stop caring about the people trying to shout you down or start being less confrontational with your responses

Therein lies the basis for my decision. I genuinely care therefor i shall not be disagreeable even if that means less participation 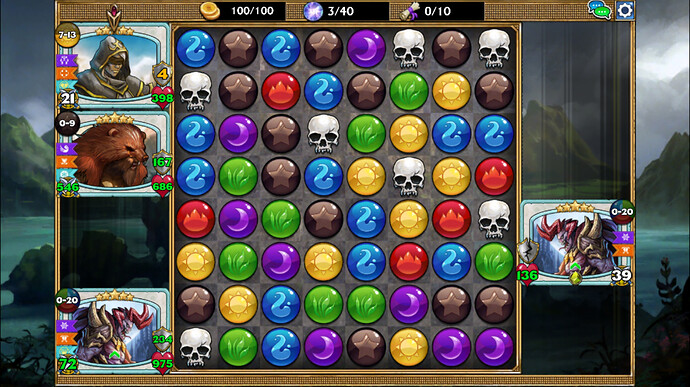 Yeah, I get it. I think there are a few people that tend to be very reasonable in their disagreements and it seems like they’ve disappeared a bit as well.

I really worry the forums are going to become a place where people just come to post complaints and it stops being a community.

It seems like a lot of the people that used to be very good at moderating things are letting their GW frustrations get the better of them so they’ve stopped policing as well. I’ve never seen a time where the forums were so singularly dominated by one complaint.

This is what happens when changes are enacted that are not in line with what people want and have come to expect from the game. The other issue being that the developers are seemingly ignoring the issues brought up in all the complaint posts and doing nothing about it.

Partially agree. I think there is more “noise” than before, but there are still a number of decent/active posters around here that make things worthwhile. It’s just a lot more work than before to weed through each topic, and look for posts from the people I respect or consider worth reading (and yes, I obviously have read your posts

The last time we did that we got some really nice love for our epic dragons Dimextria and Venbarak, along with Skull Beard seeming to be inspired by some of the Carnex feedback.

Giant buffs were also promised, but apparently they are so groundbreaking that they take time to implement!

I don’t think you should stop posting, an opposing opinion is always welcome. Its just more about how the opposing view is written.

I am sometimes guilty as well of letting my frustrations get the best of me, and there are many times I write a post - read it and then say to myself what was I thinking of writing this. So I try to learn from that.

I guess the Short version of this, is explain why your opinion differs vs just shouting down that you don’t like it. This is something every person can grow on. Explain your scenario and why you feel the opposite, not why their idea/complaint “sucks”.

I hope we can get the forums back to the community it was before as well, I do not want a toxic community.

Sorry to anyone I may have offended, and please let me know if you ever think I go over the line.

I want nothing more than this game to succeed. Good Luck

Sorry to anyone I may have offended, and please let me know if you ever think I go over the line

This is definitely a component to the current “vibe”.

Every game that has rolling updates stumbles, this one is no exception. The developers probably could have backed away from the forums if the state of the game was healthier without this minor mess.

In hindsight, right after releasing a “unfavorably received” update the last thing you should do is go into seclusion, and dramatically reduce your official substantive posts how the team is going to improve the game. I’m not saying respond to every thread, but some real preview information once a week would go a long way reduce some “toxicity”. And show the community this current game state is not permanent (I don’t believe it is but its nice to hear).

This is only a guess, but i think that the current state of the forums is the reflexion of a very precise situation:
There are actually some rather, mmm… “polarizing” mechanics that are affecting players.

It is possible to love a game, and still realize that you could do without some elements. An example i used elsewhere is, i love the Mario games. But i dislike the water levels. I deal with them and beat them.
But if you’d ask me, i really think that i would enjoy the game MORE without them. And i would not play a Mario game that is all undewater.

I have been loving GoW since release. I have shown it to people, and praised it to all my friend. It is such a fun game, it’s match-3 with strategy. There are some parts i like more, some less, some awesome, some really annoying.
There are a few mechanics that would actually make the game better for me if they’d just go away. But hey, that’s fine.
Lately, some of these mechanics are starting to show more, and more, and more, and more, and suddenly, this game i love so much with it’s tiny little things i could do without is turning into a giant display of these same things.

So much, that it is exactly what prompt me, after all this time, to register on the forums. I wanted to see if this was being looked into. I came here because i was worried that what i consider a cancer to my favorite game (or at least the way i enjoy playing it), was spreading and going untreated.
I figure i am not the only one.
Hence why you see so many posts about the same 3-4 things.

GoW is at a crossroad. It contains quite a few very very delicate polarizing issues (not naming them on purpose not to derail) and i think the forums are currently reflecting that, and the devs are going to have to make some difficult decisions, because any decisions toward a polarizing matter is gonna disappoint some people.

Hard time.
But i’ll do my best to stay positive and constructive.

The only reason I said what I said is because the person was leaving. There was nothing to “discuss.” What could you say that was at all productive? The game is great! See ya! Especially saying they’re just out for attention.

That being said, your posts are still most welcome.

I believe everyone’s free to their own opinion, so long as it’s shared constructively.
For example, I completely disagree that GW is the “worst thing” to have happened to GoW. But I DO understand why many people wouldn’t like it. Whether it’s eventually changed or not, I’m cool with it.

One of the big reasons I’m so much scarcer to find here these days is because of the constant stream of complaint threads, and when it’s not those it’s a mass graphical “meme”-yard. I’m not particularly fond of either option, so I ignore such threads.

I still enjoy the game and the community, but I can’t share in the current interests swimming around it.
So I’ll wait for when the water is calm enough again to take another dive or I choose to spread my wings and soar elsewhere. Either way, I’m presently content with staying on dry land and watching the fish go by.