Edited. Kinda wish they hadn’t changed it. Now when I have a new kingdom I’ll have to check the webz to know how many total points are required for x stars.

2600 for 5 stars, which is exactly 8 fully leveled, traited, ascended troops.

300 points for each subsequent star.

Thanks! I’ll try not to forget it in the next five minutes…
But seriously, thank you!

Any news about that issue?
There is a lot to read on the thread but have you been able to see @Mad_Butch’s post?
3.0.5 Known Issues (PC/Mobile) - #450 by Mad_Butch
Because it is not fixed at all. There is no real improvement.

If you’re reffering to stat differences it is in bold in the first post. They are still being looked into and we are trying to fix the problem.

anyone get mono dll access violation crashes?happens every once in awhile to me after playing for a long time.

I normally sit on line everyday on GoW to collect tribute with my mobile and sometimes if I don’t have meetings on the PC.

Last couple of days I have been on the PC and the tribute indicator which goes off every hour on mobile doesn’t go off at all if you just sit at the kingdom map view.

I can record it since the above says you’re still investigating. But it would be two hour long to show you no indicator.

From tech support I got the answer: we will put a fix out if necessary…
I hope this is miscommunication, because how is this not necessary?

I’m afraid you’re gonna roll out unity on mobile, and then everyone is screwed

At this point, I’m assuming the code is a mess, or this would have been fixed within hours of the first report.

Since the stats are pretty solid, it doesn’t look like it is a rounding error. It actually looks like you are counting something double for guild wars, like 7 star kingdoms.

The first thing I would do (assuming the code is a mess, and this is not all nicely together in one spot), is:
1- Find all spots where the card stats are manipulated
2- Add logging to all these spots
3- Run the game and check which logging is performed double
4- Compare the logging on android (easiest to check) vs logging on PC.

5- If nothing else works, send me an NDA and the code. 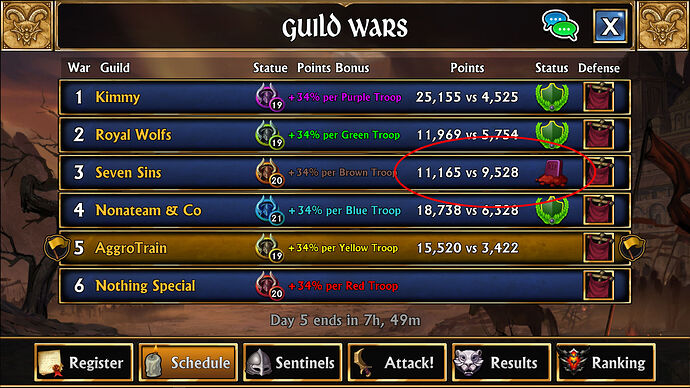 I believe the points still count after the day is over. So if people play all their games on Sunday they might end up overtaking in points a guild that they lost to during the day the War ran.

In short, someone in your guild played the battles for War 3 on a day after War 3 had finished, and that’s why you see a difference. But on the actual day of the War you guild would have gotten less points than the other guild.

It’s a compromise between rewarding people for playing daily and allowing more flexibility in GW scheduals. In the original system if you didn’t do your fights on the day of you just got them all counted as zero point losses same as skipping. The devs listened to our feedback during the previews and opened up the time frame so weekend warriors could participate and real life conflicts didn’t make you feel like you where letting your guild down, but the daily bonus still pays out at 24 hours. All fights count towards your weekly standing regardless of when they happen as long as it is before weekly rollover.

Thanks guys, wasn’t aware of this.

I’d like to make a bug report with regard to Wulfgarok, his ability, and troops that summon on death. Specifically, there have been a number of times recently where Wulfgarok has executed his Fangs and Claws ability properly, killing an opponent, but NOT Consuming anyone, despite there not being any Impervious enemies who could be “blocking” the Consume. I believe that this is happening because the Fangs and Claws target has a Summon On Death ability, and the Summon is somehow interrupting Wulfgarok’s Consume.

I have lost at least four Guild Wars matches due to this recently. I’ve definitely seen this when the Targeted troop was Drake Rider (twice tonight, against the same enemy team!), but I think it’s happened with other Summon On Death troops as well.

EDIT: Actually, I can recall having eaten the very Troop that was summoned going up against a dragon deck, so I suspect that this is specifically a Drake Rider bug.

BUG REPORT:
Team slot position get’s messed up when clicking a team, and then going back out.

To demonstrate how broken it is:
Go to the troops screen
Scroll all the way down in the team list.
Click on the top team, which should only be partially visible (so 4th team from the bottom).
Click the team again to go back.

The team you clicked is now suddenly the third one on the screen, instead of the first one.

I just lost a team due to this, because I was going to edit the next slot, which was the previous slot when I came back out of the team I looked at.

So yea… not happy

This says “appearing”, but that to me says they would show incorrectly in the scout part, but then be correct in the fight. Which, at least in my case, is not how it is, the stats from the scouting are what I get in the battle.

Also, I was under the impression that the PC stats were higher, but doing a quick test now, the PC stats, for me, are actually lower. By a lot in some cases. Eg. Kraken has 22 armor / 27 life on PC, but 30 armor / 35 life on mobile.

Statues are still not showing active or a bonus timer

Are you checking in ranked pvp or guild wars?

@3vangelica : yes, the war win or loss is considered when the day ends, but any fight past that threshold still add points (and those points count for the final war points, the one that says which reward and how much your guild moves up or down).

So, in your case, someone in your team made at least 2k points for day 3 war but most probably during 4th day.